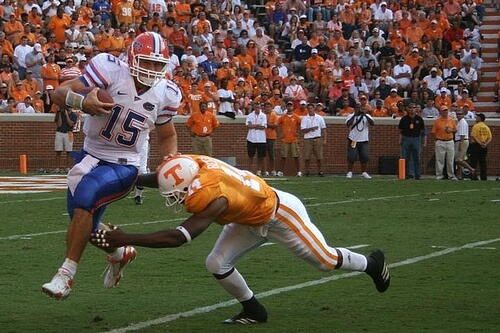 Maybe Tim Tebow will make it as a quarterback in the National Football League. Maybe he won’t.

Either way, the assault upon him over the past week or so has been ridiculous.

For some reason, Tebow seems to have become ground zero for analysts trying to create cheap attention from bombastic soundbites and a bizarre battle for football’s supposed purity. The class and integrity of, by all accounts, a tremendous human being and one of the greatest winners in sports history has been hijacked by a vitriolic debate centering around the shotgun, pocket passing and the merits of Kyle Orton.

Orton probably is better right now. Tebow probably does have a ways to go to play consistently in the NFL. But so does almost every other quarterback who isn’t a starter.

All he has done is shown up to work and done his job of trying to get better. Thursday’s exhibition game results suggest he’s been somewhat successful in doing so. There’s no reason to assume he won’t continue to improve, either.

If Denver wants him as its quarterback someday, it will keep him. If not, it will trade or release him and he can go about trying to make it someplace else. That is the way it works in the league. Man down, next man up. He and every other player in the league understand that very well.

The attacks on Tebow should stop. He’s a role model who does things the right way. Natural selection of training camp will sort it all out.

Oh, and don’t bet against any of those good things happening. He is Tim Tebow, after all.