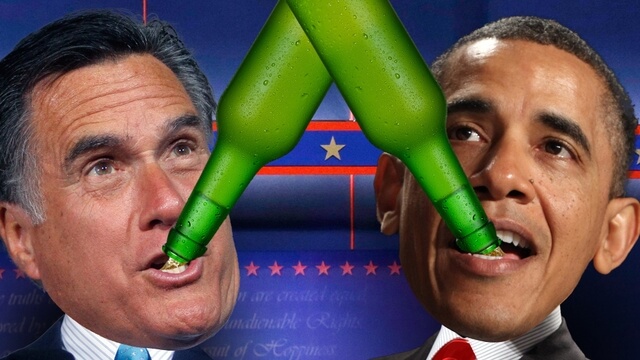 Decision 2012: Which Candidate Would You Party With, Romney or Obama?

Abigail ColbyNov 5, 2012
Home » Latest Posts » Decision 2012: Which Candidate Would You Party With, Romney or Obama?
FacebookTweet

However uptight and respectable the President and his opponent may appear during debates and interviews, these two were undergrads at one time too, and we have a strange impression that they didn’t spend all of their time hitting the books during their time in college. While foreign affairs, student loan interest rates, and global climate change are important, the real question is which one of these guys knew how rage harder in their glory days? We put America’s current political sweethearts to the to the test to get to the bottom of who was really a better time back in the day.

First round: Who would be more likely to roll up with an Emergency 30 when the party’s running low?

Our vote: The Bamer

Whether it’s health care or beer, this guy has made it pretty clear he doesn’t mind spreading the wealth. Although the President may not have had the same checking account that his Republican counterpart did in his college days, we don’t doubt that he would have no problem pitching in for the greater good of the banger. Sure, Mitt might have provided beverages as well, along with an ongoing tab of who was drinking what and how many (for accuracy and billing purposes, of course).

Second Question: Who would have the more badass go-to drink?

While we’ve always pitted the commander in chief as more of a Budweiser guy, we’re assuming Governor Romney drank something sophisticated, simple (and expensive)–like a finely bottled and decades aged Scotch on the rocks. And let’s be honest, nothing complements a smooth talker quite like a smooth drink. Although we’ll never know for sure what the young and strapping presidential candidate would have opted for circa 1969, it’s safe to say with his religious background he would have cut himself off after one or two.

Third round:  Who would throw the better house party?

Despite the likelihood that Mitt would have thrown the more extravagant bash, rest assured he, or a paid employee, would have been collecting entrance cover (What? The guy doesn’t like hand outs). We bet Obama would not only have the more laid-back soiree, but his time as an activist probably also means he would have an interesting group in attendance. And from our limited visibility as the general public, there’s little to no doubt that the guy can bust a move, and we have a feeling that pre-Michelle Barack was quite the ladies’ man.

Final question: Who would have the better-executed keg stand?

While today the governor may be hesitant to compromise his expertly quaffed hair, it’s almost certain that the athletic and competitive Mitt would not have let anyone beat him in keg stand seconds, even if it required multiple attempts (and uncontrollable staggering). And given his height advantage and recent debate demeanor, it’s safe to say President Obama was more of a pong guy, anyway.

Well, looks like another draw for these two. And while we may never know what its like to party with potential presidents, it certainly provides new perspective into an election that seems to be neck in neck when it comes to everything else.

Previous Post:Top 10 Ways to Make Your Girlfriend’s Friends Like You
Next Post:Going Home for the First Time