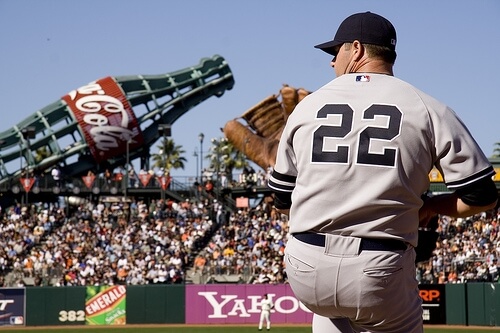 Dear Roger Clemens- You Are A Disgrace

I once worshipped you. I was wide-eyed for No. 22. Sure, there was Jeter and O’Neil, but you, you were the Rocket. Yet today, I can no longer say I have the same sentiments. I want to believe you, but I can’t. First off, played for the Red Sox. Disgraceful, but not entirely your fault. I forgave that mishap and appreciated all the success you brought Yankee Stadium. I still have qualms about your "retirement" from the the Yanks in 2004, only to unretire the ver next year and play for Houston. For Houston? Granted, you did return to the Bronx for your final season in 2007, but for me,  it's once an Astro, always an Astro. I just was irritated then, now, I find you repugnant.

As for the whole steroid mess,  don’t go blaming Jose Canseco. He may have called you out, but your complete denial is thickheaded. If you used steroids, own up to it. Your reputation is pretty much shot anyways.

You were charged for lying under oath, a severe offense in itself. A federal grand jury indicted you last August charging you with making false statements to Congress about your use of performance-enhancing drugs. I guess if you aren’t going to be reprimanded for actually using, there is some personal retribution in the fact that you’re being charged with something.

Your name sits on list after list for career successes, but your name is also mentioned 82 times in the Mitchell Report. Which legacy of yours do you think will be remembered now? For a man with more that 4,000 strikeouts and named among legends like Nolan Ryan and Steve Carlton, you have made a mockery of America’s favorite pastime. With such success on the mound, we fans put you on a pedestal. But the saying goes, the higher the pedestal, the farther the fall.

Well Mr. Clemens, I’d say you¹ve fallen all the way to the bottom without anyone’s help but your own.

Previous Post:Pick-Up Tips From…The Traveler
Next Post:How Not to Lose Your Cool at Work