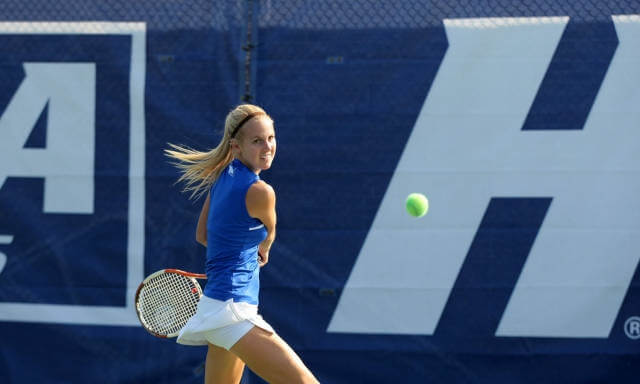 Everyone knows college basketball and football are quite popular – not only on campuses, but to the major public. All the hype and all the anticipation falls upon such sports. Players on these teams get recognized, special treatment and all the glory that goes hand in hand with being a college athlete. But what about college athletes in other sports? There are 37 NCAA-recognized college sports. So why is it that all the attention falls on a select few? For one college athlete of a lesser popular sport, all 37 are equally important.

Paige Polizois, a junior tennis player at Hofstra University and a California native, can’t stand the lack of attention her sports gets compared to the oh so popular men’s lacrosse team at her school.  When Polizois came to Hofstra, there was an innumerous amount of scholarship money because three seniors graduated. There were five full scholarships for the women’s team. Due to the law, Title IX, there needs to be an equal amount of scholarship money for men’s and women’s teams. And at that time that was the case, even though women’s tennis is not the most popular sport at Hofstra.

When Polozois was a sophomore the scholarship money for the women’s tennis team was cut in half. This proved hard for the program because recruiting with no money to offer is almost impossible, especially for Hofstra, which is in a competitive conference where most other schools are able to offer their players six to eight full scholarships.

“The decision made by the athletic department makes it very difficult to compete because there is only so much for my coach to do when she cannot offer kids money when they work so hard to earn their scholarship in college,” Polizois said. “Therefore, currently Hofstra doesn’t have the funds to offer people a full scholarship … But when it comes to the big time sports like lacrosse, full-time scholarships are offered in scores … Hofstra tennis is looked as a tier-three sport … The athletic department looks at our tennis team as a way for the tennis players to have a good experience in college, but not as Division 1 competitive athletes.”

This, however, doesn’t apply to just Hofstra University and its treatment of smaller sports that “don’t bring in the money” like the big sports. Most schools fail to treat all their athletic teams the same with the same benefits or financial stability.

But why? If money could be distributed more evenly, then more sports would have a chance of having more success and therefore generating even more money for the school. Singling out certain sports has worked for those sports and those sports alone. There is much more talent and success that can be had for these schools if only they were willing to divvy up the benefits.

Previous Post:Simple Chemistry
Next Post:Dress to Impress for the Interview