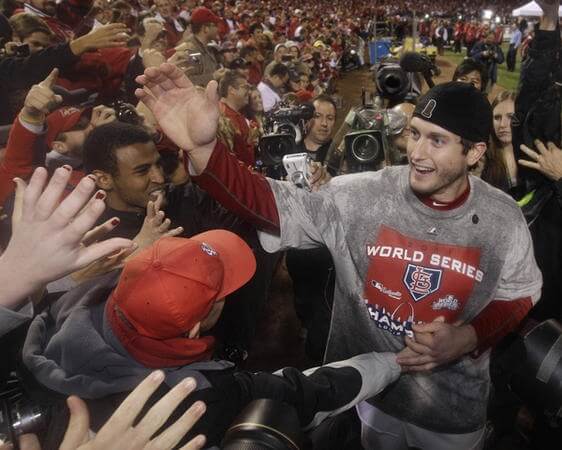 As I watched David Freese’s home run clear the center field wall early this morning to end one of the most astounding baseball game, or sporting events for that matter, I have ever witness, I began to think.

Individuals should take pride in themselves; they should not want to be anyone else than who they are. But, if you could be any person for one night, or even one hour or so, how could you not want to be Freese?

The man just lived the dream of almost every American boy in history.

Busch Stadium was his backyard. The outfield wall, if you squinted hard enough, was made of chain links or pickets. And the moment it always comes down to, a deciding game of the World Series at stake for you and your hometown team, was in play.

He tripled with two down, two one and two strikes in the bottom of the ninth with his team down two runs. He saved a season in St. Louis, the city that stands near where he grew up. He delivered possibly the most clutch non-series winning hit in the history of baseball’s postseason.

And then two innings later, the lineup came back around to him and he launched the home run to dead center field that usually only exists as a figment of our imagination, to win the game and earn the mob of humanity at home plate so many yearn to dive into one day.

David Freese lived the dream twice. And now we have the most majestic occurrence in sport ahead of us tonight. Game Seven. Someone wins. Someone loses. Winter holds off for one more day. This is as good as it can get. And David Freese is going to get to play in it after he helped make it happen.

On second thought, he’s living the dream thrice over.