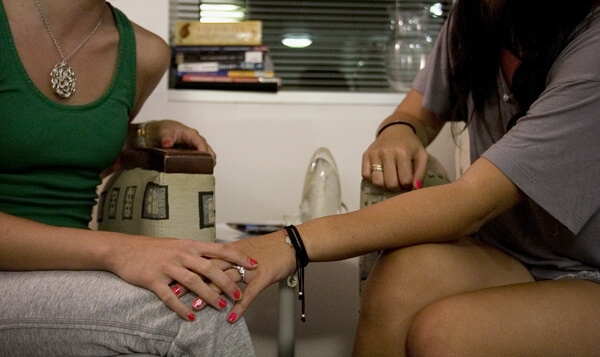 Let’s begin by stating an unequivocal truth: dating is simultaneously sort of the worst, and sort of the best. You’re getting to know someone you like, but the process forces to you become vulnerable, at least somewhat, with a person that you don’t necessarily know well and that leaves you open to rejection. Throw into the mix your sexuality, and it might seem to get even more complicated.

In college, many students are just starting to come out and it can be hard to figure out where people stand and if they will be accepting of others being queer. "I think that, in a lot of cases, students who identify as LGBT feel less at-ease in the college dating scene unless they feel that they are part of a smaller, queer-friendly community” said Kristin Russo, one of the two bloggers behind the popular Tumblr, EveryoneisGay.com. “It is a scary thing to navigate whether or not the person you are crushing on will be accepting of who you are when you don't feel that you align with the heterosexist norm.”

So how can a member of the LGBT community meet others, and potentially, begin dating?

Joining the campus chapter of an LGBT group can be a good first step in meeting people in a safe and welcoming community. But don’t stop there. Join anything and everything that peaks your fancy! Remember that getting involved on campus does not have to be a freshman-only activity and it’s the best way to meet new friends and potential dates, regardless of orientation.

When you do meet someone that you want to get to know better, sexuality does not have to be a big deal. “Dannielle and I typically tell our readers to be as honest and matter-of-fact about their feelings as possible,” continued Russo, “ it is totally feasible to tell someone that you are single and like to make out with people of the same gender and then [whine] about the rubbery cheese-sticks in the dining hall in the same breath.”

Dannielle Owens-Reid, the other half of the duo, suggested to not get bogged down in terminology and labels.“Don't think of it as being 'newly out' and 'getting into the gay dating scene'. Try to remember we are all people and you are attracted to a PERSON, not their gender,” said Owens-Reid. “People tend to get caught up in all that, but when you're dating someone new, you're dating someone new.”

Be who you are– whatever that entails– including making sure you have a supportive group of friends around you. Focus on getting comfortable with yourself and doing what you love without worrying about finding the perfect person or worrying about stereotypes.

Finally, don’t be afraid to reach out for advice. For example, you can check out Russo and Owens-Reid’s blog, and know you’re in good company. “We started EIG as a joke. People were giving me [a hard time] for [my other blog] LesbiansWhoLookLikeJustinBieber and Kristin wanted to talk some sense into them, so we started an advice site. Before we knew it we were getting thousands of questions that were serious and heartbreaking and sometimes hilarious. We found our niche,” said Owens-Reid. “We create a place where kids, young adults, parents, anyone could go and feel okay with asking the questions they were afraid to ask their friends.”

Dating can be unpredictable, but we all do it and it has the same trajectory, regardless of who you’re dating, and what sexual orientation you might be. “I think love and dating are one of the wonderful things we all have in common,” continued Owens-Reid. “We get in relationships, it's amazing, you feel fluffy inside, it gets a little more serious, sometimes you fight, you fall in love, you laugh together, you think about marriage… same basic steps, different anatomy.”