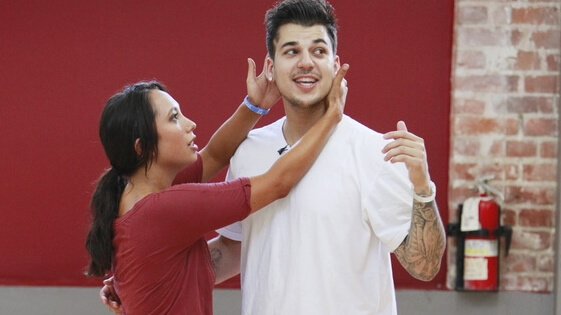 The new season of Dancing with the Stars (DWTS) is right around the corner. Starting September 19th, 12 new celebs will take to the floor with their professional partners and hope to dance their way to the Mirror Ball trophy.

The lucky A, B, C, and D-isters selected include some not-so-famous faces, but with the help of our trusty friend Wikipedia we’ve finally figured out just who everyone is. The ladies include legal commentator and Tot Mom’s worst nightmare, Nancy Grace; reality star and almost- Mrs. Jay Cutler, Kristen Cavalleri; the original Tracy Turnblad and talk show host Ricki Lake; daughter of The Mamas & the Papas’ John and Michelle Phillips and member of Wilson Phillips, Chynna Phillips; Italian model and George Clooney’s ex Elisabetta Canalis; and soccer star Hope Solo. The fellas competing include Scream star and former Mr. Courtney Cox, David Arquette; NBA champ and slightly eccentric Ron Artest; Kim Kardashian’s little brother, Rob Kardashian; 1/5th of the Queer Eye for the Straight Guy quintet, Carson Kressley; soap opera star and former member of the U.S. Army, Jr. Martinez; and child of Sonny and Cher and transgender activist Chaz Bono. Although the season has yet to begin, people are already a buzz with predictions on who will win it all and who will be sent packing first.

While we’d love to believe the show is all about dancing, it’s really a fame game – see Bristol Palin’s third place finish.

“I think Ricki Lake will be the first to go home, because where has she been the past ten years, except as a joke on shows like Family Guy," said Dvora Harel, a junior at the University of Miami.

Natalie Rozenblat, a senior at New York University, had a slightly different prediction. “I think the most stiff, and unknown guy will probably go home first. That might be Jr. Martinez," she said.

But when it comes to predicting the winner, our best bet is the star will belong to one of two categories. The star will either be a gorgeous lady with a killer body a la past winners Kelly Monaco (Season 1), Brooke Burke (Season 7), Nicole Scherzinger (Season 10), and Jennifer Grey (Season 11).

“I think Kristin Cavallari or Elisabetta Canalis will win because the girls with the model figures and long legs always make the movements flow better," shared Monica Balyasny, a junior at Brooklyn College.

Or the star will be an admired athlete with the perfect combination of charisma and stamina, a la past winners Emmitt Smith (Season 3), Apolo Anton Ohno (Season 4), Kristi Yamaguchi(Season 6), Shawn Johnson(Season 8), and last season’s winner Hines Ward.

“I think Hope Solo will win because of her athletic background. Athletes seem to have a pretty successful track record on Dancing with the Stars,” said Christy Dabreo, a senior at Baruch College.

And while our predications may not be set in stone, one thing is for sure, with bold personalities like Nancy Grace and Ron Artest sharing the stage, this season will definitely be filled with tons of shocking moments.