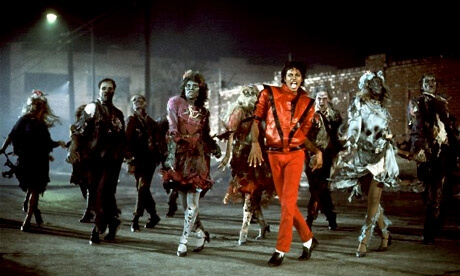 This music video is seriously – well, disturbing. From a one-eyed toothless convict to seizure-like dancing, the video has all the makings of a horrible nightmare. Add in glazed-over-eyes and a scene where Rihanna looks as if she’s part of a human sacrifice ritual and this horrible nightmare fits perfectly into the scary video catergory.

With a song title like "Bones," it's no surprise that this video is filled with skeletons. As if skeletons weren’t frightening enough, the video actually features people randomly transforming into their skeletons by pulling off their human skin. At one point two of the skeletons run toward each other on the beach a la a romantic moment. Too bad it ends with them actually bumping into each other and shattering, not exactly leaving us with warm and fuzzy thoughts.

We’re not quite sure who came up with this concept but it’s definitely one sick and twisted person. The video features kids vandalizing cars, dragging around axes, sucking blood and worst of all carrying a dead dog. You’ve been warned this isn’t an easy one to stomach.

Though it starts off a little slow, this video brings the scary once the vampires arrive. Be warned – these aren’t vampires of the Twilight variety, but rather of the bloodsucking evil variety. Throw in some blood and creepy crawling action and this is sure to leave you with some chills.

No scary music video list is complete without this classic.  If there were ever a formula for how to create the ultimate scary video, this one would fit it perfectly. With werewolves, zombies and a cemetery, this video definitely deserves a spot on our list.