Josh Axelrod   April 18, 2012  (Updated: October 26, 2014)
The expression “make love not war” is overrated. I propose that we amend it to “make epic rap battles, not war.” If we could solve all our conflicts like this, the world would be a much better and more entertaining place. Imagine if the war in Afghanistan was fought not with guns, but with epic hip-hop showdowns. Not a drop of blood would be spilled. Just look at what happened when Sarah Palin and Lady Gaga met on the field of rap battle:
That’s just the tip of the hip-hop iceberg. For the uninitiated, Epic Rap Battles of History is one of the most successful web series in the history of YouTube. It’s the brainchild of Peter Alexi Shukoff and Lloyd Ahlquist (or Nice Peter and Epic Lloyd as they are known online), two college dropouts who had the brilliant idea to pit real people and fictional characters against each other in a struggle of poetic domination.

It’s good to know that Peter and Lloyd are the ones responsible for encouraging my procrastination problem with their videos. Of course, making their videos good enough that they’re worthy of postponing homework was more or less their goal.
“We’ve been doing it for the fans since the very beginning,” said Peter, whose YouTube channel, as of April 17, 2012, has 1,554,883 subscribers and 452,850,890 video views. “We want each [rap battle] to mean something to someone.”
Peter was a YouTube celebrity long before Epic Rap Battles became an Internet sensation. He had been building up an audience by posting his original music, like “I Fell Asleep on Her Boobs,” on his own YouTube channel.
“I started a conversation with the audience,” he said of how he gained legions of adoring fans. “It got up to be 100,000 people watching what I did.”
Around the same time that Peter was blowing up in popularity, Lloyd was doing hip-hop comedy shows at Los Angeles’ Westside Comedy Theater. The two joined forces, and, when their second video (Darth Vader vs. Hitler) had reached two million views in two days, they knew they had, as Peter said, “stumbled on something really cool.”
Since its inception in September 2010, they’ve had Vader tell Hitler to “suck his robot balls” (twice), Gandalf and Dumbledore go staff-to-wand in a battle for magical supremacy and Christopher Columbus lyrically show James T. Kirk who the real captain is. The rap battles are silly and crude, but they’re also some of the most fun you can have on YouTube.
“We look for characters from history that mean something,” explained Peter. “If these two characters met up in a room, would they have something to argue about?”
Not only do these two thoroughly research and put together each video, they’re also usually the ones spitting rhymes in ridiculous costumes. Lloyd said he had fun battling Billy Mays as Ben Franklin, who he said “looked like the Penguin.” Peter enjoyed flipping pianos as Beethoven as he schooled Justin Bieber.
“I don’t have any complaints about any of them,” said Lloyd, clearly proud of his baby. “My favorite one is whatever we’re working on at the moment.”
Peter and Lloyd are most proud of the way they’ve been able to interact with their audience.
“People feel like they know us on a very personal level,” said Peter. “The YouTube audience has a sense of ownership in our success. A YouTube celebrity has a much closer connection to the fans than a ‘regular celebrity.’”
Though, as Lloyd mentioned, the close relationship to fans means criticism “comes with the territory. You can tell within the first two minutes of releasing a video what the vibe will be. People are very honest and vocal about what they think.”
“Any feedback is better than complete disinterest,” said Peter, though he did make a an exception for the fan who told him his “chin looks old.” 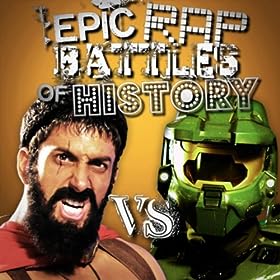 The dynamic duo also loves how other YouTube celebrities have jumped at the chance to participate in a rap battle. Lloyd compared this community of collaborators to “the old music scene, Miles Davis playing on a John Coltrane track.”
Lloyd quickly made sure he wasn’t implying that he and Peter were the Davis and Coltrane of YouTube, but the fact that the two have, according to Peter, “a list of suggestions a mile long” for more rap battles suggests otherwise. So when I suggested writing a few verses for Katniss Everdeen from The Hunger Games, they were intrigued.
“I just finished the third book [Mockingjay] last night,” said Lloyd. “We’re definitely interested in strong female characters.”
So if you see Katniss cutting Bella Swan down to size sometime soon, you can thank me. Of course, at this point, Peter and Lloyd don’t need anyone’s help to strike gold. They know exactly what they’re doing.
“We’re in the YouTube business,” said Peter. “That’s what we do.”
Photo: at http://www.rankopedia.com/Best-Epic-Rap-Battles-Of-History/CandidateData/24896/.htm

Previous Post:How To Spot A Bro On Campus
Next Post:Top 10 MLB Ballparks