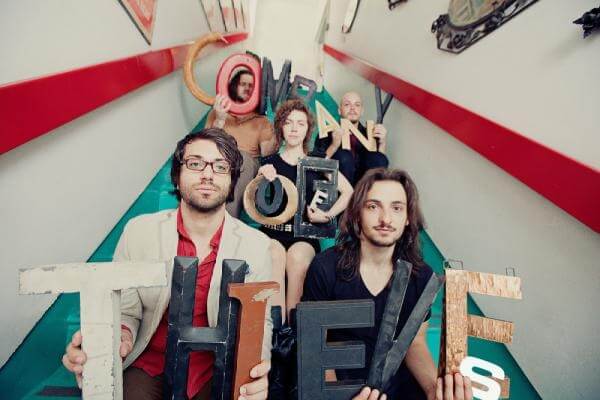 Company Of Thieves’ fans rejoiced with the advent of the band’s latest release: Running From a Gamble. The much-anticipated album hit stores over two years after their first offering, Ordinary Riches, and does not disappoint. The refreshing 13 track full-length clocks in at just over 50 minutes and harbors a slew of new vibes. Running From a Gamble maintains the genre mashing heard on Ordinary Riches, but catapults the band into even more diverse sounds.

When asked about the band’s eclectic tendencies, guitarist Marc Walloch explained to College Magazine: “We don’t allow any genres to keep us in a cage.” This “natural and free” process, as described by Walloch, is evident on tracks like the brass-driven “Tallulah” and the biker bar thump of “Gorgeous/Grotesque.” “Any new sounds you hear aren’t coming from a conscious place,” added Walloch. “All of us love so many different kinds of music so it comes out of us organically.”

Running From a Gamble is not only a solid songwriting effort, but also a sonically massive one. “We spent everyday for months fleshing out details and recording in our basement,” explained Walloch. “It was more of a collaborative effort this time around which is why it has such a big live sound to it.” This “big live sound” is heard on tracks like “Queen Of Hearts” and “Nothing In The Flowers.” Here, crunchy guitars and cymbal crashes lay the groundwork for dynamic vocals lines, filling the audio spectrum.

Company Of Thieves’ vocally intensive trademark shines on the album. Vocalist Genevieve Schatz moves freely from styles reminiscent of Cat Power and Feist to the powerhouse Florence And The Machine. Tracks like “Modern Waste” and “Death Of Communication” feature the explosiveness of Schatz’s punchy delivery, yet allude to her familiar vintage crooning on “Syrup” and “King Of Dreams.”

Despite the pressures surrounding the infamous “sophomore slump,” Walloch said Running From a Gamble means something completely unique to the band: “Its about taking major risks so that we can be on the run from living a life that isn’t inspiring or positive to us.” Like many musicians, Walloch attended college for a short period of time before devoting himself completely to music. The passion-driven guitarist added, “There’s not just this universal life plan that we are conditioned to think we are supposed to live.”

As his band gains considerable media attention daily, Walloch advises students to “find what you love and be real and honest,” adding that, "When people feel honesty it’s infectious and contagious.”  But signing to a label doesn’t cure bands from the rigorous hard work of constant touring and self promotion. ”We are still working so hard and trying to overcome so many obstacles and stress to get our music heard,” Walloch said. When asked for any last thoughts, the optimistic Walloch followed his own advice on honesty and passion: “We sincerely appreciate the love that we have received and it gets us through the days and reminds us that we living the dreams we had as young kids. Thank you!”

Overall, Running From A Gamble rises to the occasion and exceeds the expectations of waiting fans.  This hefty release packed with jazzy guitar licks and chorus centric song structure maintains the definitive Company Of Thieves’ sound, and yet still embodies the band’s authentic persona.