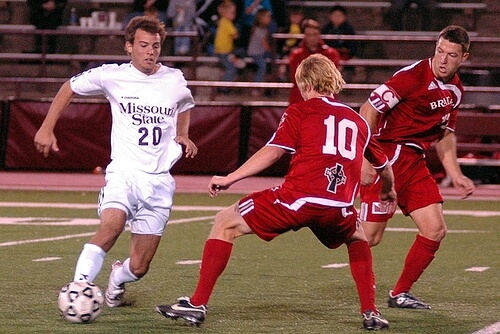 As NCAA soccer teams do their conditioning tests and prepare for their exhibition games, let’s look at who has the best chance at being the last team standing in December.

Just like Lady Gaga, the Cardinals were on the “Edge of Glory” last December when they lost 2-1 to Akron in the NCAA Championship.  Nine of the 11 starters from that team return and will be hungry to have a different result in the College Cup this December.

The Cardinals will be battle tested and challenged at the start of the season and in the middle of the season without much of a break.  Out of Louisville’s first ten games, only three opponents are not ranked in the NSCAA pre-season polls. The Cardinals will then finish out the season with seven tough conference games.  Louisville may get roughed up and may not have the best record in the nation, but their experience and team leaders should help them keep their heads up.

“We have guys like Kenny Walker, Andre Boudreaux, and a number of other guys who have experienced quite a bit,” head coach Ken Lolla said.  “They have very good work habits and very good examples for the younger guys, and they will also be leaders for us.”

With possibly the most difficult schedule in the nation, the Cardinals will be ready for the NCAA Tournament when it comes around in November and should be holding the national championship trophy a month later.

The Zips are ranked second in the NSCAA poll, which is a pretty high ranking for a team that lost so much of their national championship team.  Akron will be missing five of its top six point-getters from last season and only three players who saw time in the national championship game.  Head coach Caleb Porter brought in College Soccer News’ #2 ranked recruiting class but that is a lot of inexperience to lean on. The schedule isn’t too demanding. The Zips will play their first top-25 opponent in Ohio State late September and will only play two more for the rest of the year.

Many seem to have forgotten how the Tar Heels reached the NCAA quarterfinals in 2010.  They won three straight penalty shootouts.  Either way, UNC lost six starters from that squad including MLS players Michael Farfan and Alex Dixon.  The Tar Heels still have their top scorers, Enzo Martinez and Kirk Urso, and All-American forward Billy Schuler. Even with all the returning firepower, the defense was UNC’s key to success last fall.  They ended the year tenth in the nation in goals against average with a .68 average, and a .75 average in the NCAA Tournament.  Champion Akron and runner-up Louisville had worse averages.

We’ll see how the backline pans out after losing two starting defenders. They are gaining transfer All-American defender Matt Hedges from Butler and UNC also had the top recruiting class in the nation according to College Soccer news. Thinking that all these pieces will mix is a gamble.

The NSCAA and College Soccer News somehow left the reigning Big East Blue Division regular season champions out of their polls. It would make sense if the Hoyas lost a lot of talent, but they didn’t.  Georgetown returns Big East Midfielder of the Year Ian Christianson and their top scorer in freshman phenom Steve Neumann.

“I think we have a very solid group of both returning players and incoming freshman,” Neumann said.  “I think having success last year gave us a good sense on what we need to do in the upcoming years to win games in such a tough league.”