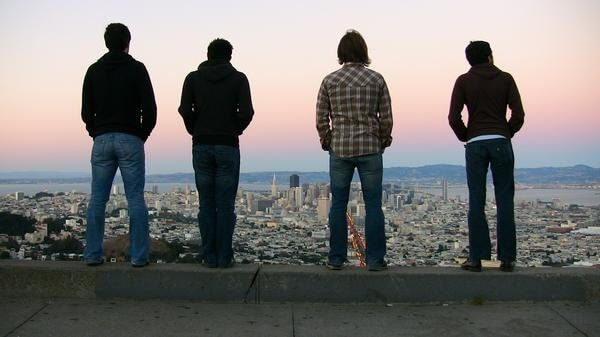 Taryn WemJul 26, 2011
Home » Latest Posts » College Mag Interviews Signal Hill
FacebookTweet
Signal Hill is an all-instrumental band based in Los Angeles, Calif. College Magazine interviewed one of the guitarists, Dave Masters, to find out about the inner workings of their music and their goals as a band.
1.  Any questions that you’re tired of answering?
– Where’s the name of the band come from?
– How long has the band been around?

2.  As a full instrumental band, how do you convey emotions that may have come through the use of lyrics?
From our standpoint we get together and write songs. It’s a very organic process, we sit in a room, we typically sit there and move around parts. Playing what feels right, what we would listen to, brings it into realistic terms. On a lyrics side, one of the things that has always been, maybe even easier, you don’t have to relate lyrics to connect with the music or audience. Not everybody may be able to relate to that all of the time and that allows people to interpret it to however they want.

3.  Right now, you’ve got it setup on the band’s website to let the fans choose what the setlist for your upcoming fall shows is.  Why did you choose to do that?  What has the response been?
We’ve been playing four years in the same city (LA). That started to change in 2009 when one of the members went to Scotland for a year (University of Edinburgh) we had to figure out how to make the band work. We sent ideas back and forth trying to recreate a rehearsal schedule.  We decided we had to play on the east coast and we were finally able to do it (half the band lives in NY). But then we got stuck on what songs to play.  We have this whole catalogue that nobody has seen us play live. The west coast has seen it all but nobody has actually seen us on the east coast.  We though, let the fans pick what they want to hear. So we narrowed it down to 12 or 13 to choose from.

4.  Any new plans or projects in the works?
We’re doing a split 7” inch vinyl with Australian band, All India Radio.  We’re going to do one song, they’ll do one song.  Brian and Tim go into the studio July 17.  Richie and I go in July 24 to track for our upcoming EP.  And then we have a small fall tour coming up with dates on our site.

5.  I saw on the website that you guys are doing a bi-coastal situation, and you just got into NY a few hours ago. How does that work? Any difficulties?
That was sort of our test. Ultimately we’re all very proud of how that turned out. Everybody has their contributions, for anybody to be away it’s a little bit tougher.  The nice thing is one of the members lives around the corner from me. It’s definitely different than it used to be but this is working out pretty well. The songs are a little bit more focused, a little more cohesive even. Part of that is that we’ve been playing for a couple of years now so we know how each other works.
I think for people who’s been in a band for a year it might have fallen apart. We’re all really good friends, love making music, we don’t want any drama; we’re a no nonsense band. But we realize this wouldn’t be as possible seven or eight years ago. Honestly, maintaining a schedule is one of the hardest parts. Now we kind of have to get back on it with shows coming up. It’s challenging but it’s a different type of experience.

6.  Being a straight instrumental band, do the members know any other instruments or just specifically what they play?  Do you guys ever experiment with switching instruments?

Dave – guitar, bass
Rishi – guitar, piano, drums-multi instrumentalist guy — sometimes he plays piano, most of the time plays guitar. He also advises drum parts to help articulate message
Tim – guitar, keyboards
We kind of stick to core instruments, at times Richie or Brian will play keyboards.  Although that’s not out of the question.  We’ve talked about switching instruments with the arrangement we’re doing now.  Why not try somebody else writing melodies?  We’re opening that up creatively in the future, maybe.
In Tim’s side project he plays piano, drums, and guitar.  They alternate instruments in a live setting.
FacebookTweet
Life

Previous Post:Timing Those 3 Words: I Love You
Next Post:Dirty Mouth? Clean it Up…Before You Get Fired