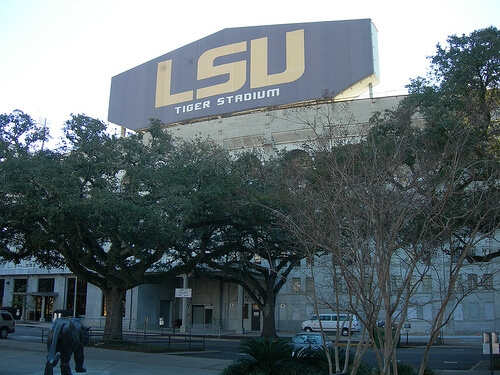 The BCS is junk. The AP poll is mediocre at best. And don't get me started on the Coaches’ poll. Ever wonder what a poll would look like if it was voted on by people who eat, sleep and breathe their team and live to dissect their opponents? Thank God for the Internet.

It’s only fair that those who lay idly (Or scream and stomp around actively) and watch college football for 12 hours every Saturday a have their say in who the top dog is amongst other enthusiasts.

Of course because the BCS overlords crown the eventual “champion,” the AP and Coaches’ poll are kind of inconsequential and are really just fodder for debate and hype. So is this one.

Why not give this one a peek every week. It’ll be more ammo when you’re arguing with your slack-jawed buddies about whether LSU’s ugly win over Oregon on Saturday really means they should be the No. 1 team in the land (Hint: Of course they should be!).

When you look at the other two polls, how could the AP poll and the Coaches’ poll really fuck that up? I mean seriously HOW? Oklahoma (AP, Coaches’ No. 1) shredded a ferocious Tulsa squad while Alabama (Coaches’ No. 2) pistol-whipped a scary Kent State team into submission. The whole time, LSU was knocking out a patsy Oregon side. The whole thing is nauseating. Which is why I implore you to make the trip to SB Nation every Wednesday and check out the fine work they’re doing.

Here is this week’s poll for your viewing pleasure, with LSU sitting mightily atop the board. Also, read Spencer Hall’s weekly Alphabetical, it's a hilarious recap on the weekend that was in college football.

Previous Post:Is LGBT Health Being Neglected by Medical Schools?
Next Post:Dance Like You Mean It