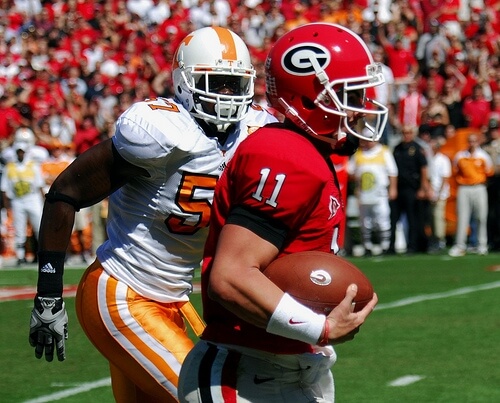 Is it really time to start talking about college football again?  With the Ohio State scandal and North Carolina’s house cleaning binge in the rearview mirror, let’s wipe the college game’s stained slate clean and start talking about the upcoming season.  Let’s play the annual guessing game that is anything but a precise science: who is poised to have a breakout season in 2011?

For a player to be considered a “breakout” star, they cannot be established household names like Stanford quarterback Andrew Luck or Oregon running back LaMichael James.  These are players whose true potentials have been held back due to circumstances like injuries, playing in the shadow of an even greater talent, or just simply not getting the national attention they deserve.  Here are the five college football players most likely to reach that potential in 2011:

1.)  No one wants to be the guy splitting playing time with a Heisman winner, but that is the situation Alabama running back Trent Richardson found himself in last season.  Mark Ingram may have had the spotlight shining on him all last season, but the 220-pound junior from Pensacola, Fla., still finished the season with 700 rushing yards and six rushing touchdowns.  In addition, grabbed 266 receiving yards and four receiving TDs.  With Ingram now a New Orleans Saint, look for Richardson to leave folks asking, “Mark who?” as he leads the Crimson Tide in 2011.

2.)  When you think of the Big 12, schools like Oklahoma and Texas come to mind more quickly than Baylor.  That might start to change if the Bears, who reached their first bowl game since 1994 last season, can keep riding the talents of junior quarterback Robert Griffin.  Griffin has quietly made Baylor football relevant again, throwing for 3,501 yards last season with 22 touchdowns and a completion percentage of 67.0.  Two years removed and fully healed from an ACL tear, this should be the season where he starts getting the recognition his abilities demands.

3.)  Georgia quarterback Aaron Murray will come into the 2011 season hoping to avoid the dreaded sophomore slump, but if his freshman numbers are any indication, that should not be a problem.  Though his team underperformed in 2010, Murray threw for 3,049 yards and 24 touchdowns and earned freshman All-American honors in the process.  His favorite target A.J. Green is now in the NFL, but as long as his receivers can catch and he stays healthy, watch out for Murray to continue stuffing stat sheets.

4.)  It’s hard to find a silver lining in the Tressel/Pryor debacle.  The only thing that comes to mind is that now the school can move on and focus on the future. No one encapsulates that fresh start vibe more than junior defensive lineman John Simon.  Up until this season, he had been playing behind Cameron Hayward, who was drafted by the Pittsburgh Steelers in the first round.  Simon’s time is now: he benches and squats 450 and 700 pounds respectively, works as hard as any other Buckeye, and could be just as dangerous a pass rusher as Hayward was.  Remember his name.

5.)  This Tiger is ready to be unleashed.  Sophomore running back Michael Dyer finished last season with 1,039 rushing yards and 5 touchdowns.  Now imagine what those numbers might look like if Auburn had relied more on him and not on eventual Heisman winner and number one overall NFL draft pick Cam Newton. This season, Dyer will be the lynchpin of Auburn’s offense as it tries to defend its BCS title.  If the school has any chance of repeating, it will be because Dyer has the breakout season he couldn’t have playing beside a player who commanded as much attention as Newton.  Let the Heisman talk commence.