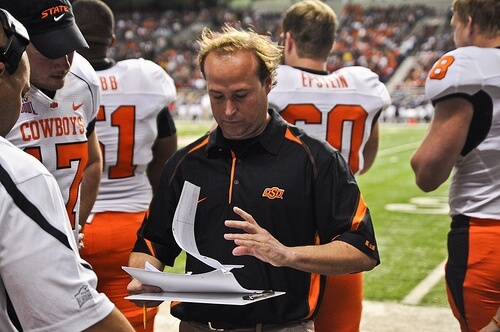 There’s nothing wrong with paying dues, or waiting for an opportunity when the time is right. However when the dues are cut and dry and opportunity is set to show up at a certain date, often times things don’t work out.

West Virginia is learning now why the trendy coach-in-waiting phenomenon is a slam dunk or a ship sunk.

It would be awkward, sure, but nothing worse than that.

Holgorsen behaved badly at a casino. Then an anonymously sourced report said he has a tendency of behaving badly at casinos and elsewhere. Then fingers went flying, accusing everyone of trying to spread dirt. Now we are at the current situation – a clear Holgorsen/Stewart snafu, and Luck saying through a release he will deal with it all “internally and privately.”

Just another instance in the long line of them proving the coach-in-waiting deal is a dumb one.

Yes, there have been some stable coach-in-waiting transitions. Year 1 of the Joker Phillips era at Kentucky went pretty well once Rich Brooks retired. Chip Kelly and Oregon haven’t missed a beat since Mike Bellotti left Eugene.

But then again, Texas coach-in-waiting Will Muschamp is now the coach at Florida. Maryland’s appointed successor to former coach Ralph Friedgen, James Franklin, is now the self-appointed “CEO” of Vanderbilt football. Also, Florida State’s coach-in-waiting set-up basically facilitated a situation where Bobby Bowden could be all but fired in order to give Jimbo Fisher the gig.

I understand why the idea appeals to ADs and school presidents. If everything works as it should, you keep your staff together. You don’t lose ground in recruiting. You maintain an identity. You extend a trust with fans. You don’t have to worry about overpaying for a new coach or having to get down and dirty in the in the coaching carousel.

But for every smooth transition of power, there is a messy one – and when things get messy, they get messy– and that’s where the irony lies.

After all, the coach-in-waiting is supposed to prevent a mess before one even gets made.