It’s a game that requires an incredible amount of speed, athleticism and coordination. It’s played all over the world and crosses both cultural and magical boundaries. In the past seven years, Quidditch has escaped the pages of Harry Potter and become a legitimate sport for collegiate muggles.

The first Quidditch World Cup was in 2007, and currently features over 100 colleges from several countries that travel to New York City every year for the big tournament.

No invisible cloak can hide the fact that there are certain schools that are consistently at the top. Below are the top ten American universities that ranked high in the 2011 World Cup.

It’s no surprise that the college that established the idea for muggle Quidditch is always at the top of the rankings.  Middlebury hosted the first Quidditch World Cup in 2007 and has gotten first place in every Cup to date. The school is a destination for anyone looking to pick up a broom and pursue Quidditch. Middlebury is so skilled in this game that many people have a suspicion that they are in fact real wizards. I wouldn’t be shocked if they changed their name to Middlebury School of Witchcraft and Wizardry in the near future.

University of Kansas Quidditch has evolved in the past year from a 12 member club to a world leader in the game. “We got huge this year. We started out as nothing and we practiced in a parking lot. Now we are an official sports club at our school with about 50 members,” said University of Kansas junior Nicole Denney, the current president of the Quidditch club. In 2011, Kansas won the Midwest cup in Indiana a month before attending the World Cup. Middlebury better look out for these up-and-coming stars.

Louisiana Quidditch was founded soon after the first World Cup in 2008 and has quickly become a big name in the sport. Last year, the team got first place in the Texas A & M Quidditch Classic and fifth place in the World Cup. The school also hosted an inaugural World Cup Tournament last April. Quidditch at LSU is open to anyone interested in joining the magic.

Aimee and Kristen Howarth founded the Quidditch team at Texas A & M in 2008 after watching videos of the first World Cup in Vermont. Since then, the team has risen to seventh place in the world during only their second year in existence. In 2010, they ranked 12th but placed first in the Southwest Regional Tournament.  Now they host the Texas A & M Quidditch Classic Tournament every year. 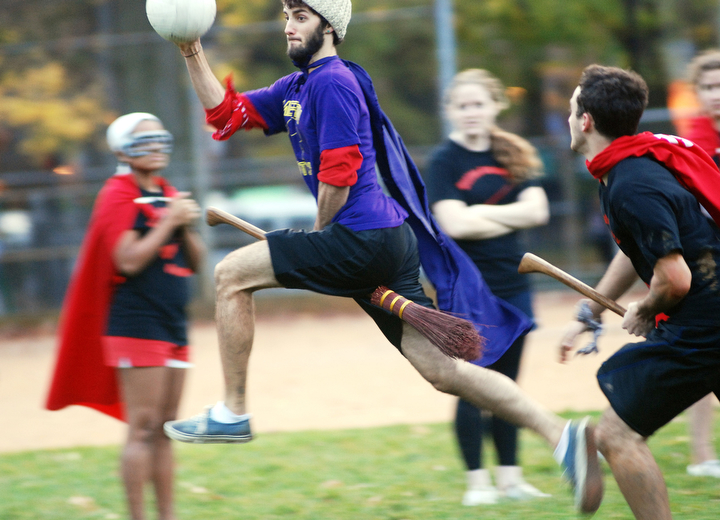 “We don’t fly. We don’t think we can fly. We play Quidditch.” That’s Emerson’s motto and it seems to be working, because the team ranked fifth in the world last year. Not only is the team skilled at catching the snitch, they have built an entire website devoted to posting photos, videos and updates of their games. Established by 14 freshmen who decided to dream big, Emerson Quidditch soon became an actual sports league at the school. The club includes five separate teams who compete for practice until they join together for the World Cup.

This team is convinced that anyone who tries Quidditch will instantly be swept away. They are very serious about the sport and practices at least two times a week in order to keep their team at the top of the world standings.  They have hit the ground running (or flying?) coming back from winter break by participating in the Ives Tournament and beating the second place ranked team.  They came in third at the Northeast Regionals at Hofstra University last year and are currently planning a Shamrock Cup to be held on St. Patrick’s Day. “The people that say that Quidditch isn’t a sport obviously haven’t seen it. They say that because of the brooms.  We think it’s harder than many other sports and it’s really competitive . One of the beautiful things about it is it can very much be approached in any capacity,” said University of Rochester Junior Katherine Pieper, the president of Quidditch at the university. 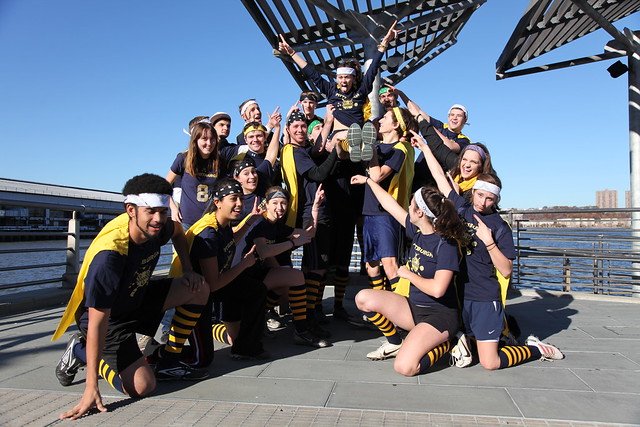 This university could be moving up this year after going undefeated at Ives Pond Invitational last weekend and placing first. The team first entered the World Cup in 2009 and ranked fourth in the world during their second try in 2010. Their theme song is “Build me Up Buttercup” because they are always looking to rise to that number one spot.

This team was founded in 2009 and is “rapidly expanding” according to the team’s Facebook page. Last October, the team went 3-1 at the Second Annual Brotherly Love Cup in Philadelphia. Despite stiff in-state competition from Pitt, this team is still making a name for itself as a representation of muggle Quidditch in Pennsylvania.

When you think of Quidditch, the first city that pops into your head is Milwaukee, Wisconsin, right? Okay, that’s far from the truth. However, this Milwaukee team is pushing its way to the top after ranking eleventh in the world last year. Established by current Captain Curtis Taylor last year, the team has a modest 16 players. They ranked seventh in the Midwest cup last year and are largely considered underdogs who have already proven that they mean business.

Boston University ranked twelfth in the World last year after winning the Northeast Regional Champions. Although they fell to Middlebury in one of the final rounds of the World Cup, this team is not ready to give up. They have already begun extensive training to do better next year and catch the biggest snitch of all: a World Cup title.