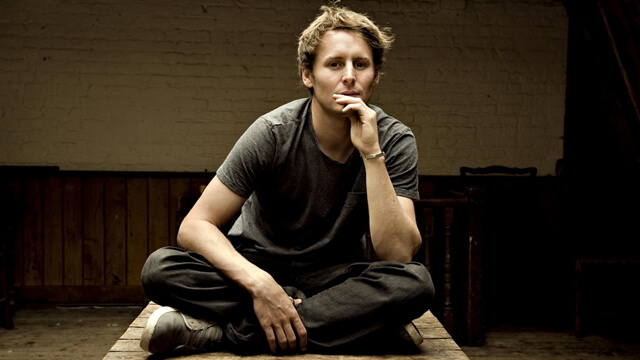 Missa SangiminoMar 22, 2012
Home » Latest Posts » CM Interviews British Folk Star Ben Howard
FacebookTweet
It takes a special kind of person to find joy in life on a bus. But it’s the simple things that seem to make 24-year-old folk star Ben Howard happy. “I get to play music and sit on a bus,” Howard starts. “I’m pretty privileged.”
This sense of humility and easy contentment resonates not only in his songwriting and instrumentalism, but also in the way he speaks of his past. Howard was born in London and grew up outside of the city in small-town England. “I had a good upbringing. I got no sob stories,” Howard explains. His assured, mellow background and the purity of his hometown seem like sound explanations for the calming and melodious nature of his music. “There’s no trending or ‘East London scene’ there so it gives me a lot of freedom to play what I want to play,” says Howard. “I’ve always done what I wanted to.”
The placidity of his history, however, does call to mind a big question: if not from past conflict, then from where does the inspiration for his songwriting come?

“I think one of my favorite things is to people-watch. I love to sit down and watch everything go by—things in and out of my life,” Howard remarks. As he continues to explain his quiet process of observation, the ease of his happiness and inspiration becomes a bit more obvious. Still, his persona suggests that there is something much more complex and illuminating beneath the surface. “I think most of the songs end up being part of my life,” claims Howard. He says that his method for songwriting is based mainly on his ability to hear inner music. “It’s great,” he says. “I have a listen to what’s coming out of my head and heart, and people are like, ‘oh I want to come and listen to this.’”
Howard’s ability to write is, in part, a result of his education. In fact, Howard himself attended college at University College Falmouth, Cornwall for two years to study journalism. Although he enjoyed the creative writing, this style of writing did not seem to inspire Howard as much as songwriting always had. “I like writing and I like reading quite a lot,” he says. “I don’t think I work hard enough for journalism. Unless it’s something I’m really passionate about, I’m kind of a slacker really.” So what is Howard passionate about? “I like sitting up and drinking tea, smoking roll-up cigarettes and just staying up late in the night writing music,” he explains.
His music is incredible in the same way that Howard himself is incredible: it is simple but compelling. The songs themselves are plain—just a guitar, his voice and a hollow background—yet so overpowering that they subdue concentration on anything outside of the music. Listening to Howard’s sound is all-encompassing; it is a feeling of being swallowed by quietude so overwhelming that listeners have to wonder how such a powerful sound could come so effortlessly.
“Music has always been a part of me. I’m a huge music fan and it has become a job and a profession. I can do something I love full time. It’s completely and naturally my lifestyle.”

Considering Howard’s mentality, his advice for college students—given reluctantly—is not surprising. “Nothing wrong with a bit of partying,” laughs Howard. “I had friends tell me that when I did most of my degree and drop out that I wasted two and a half years of my life. But you use university and colleges to figure out what you’re doing. It’s a good period of your life to see people and meet people and figure out what to do,” Howard says.
His new album Every Kingdom is set to be released in the U.S. on April 3. Having been lucky enough to take a listen to it already, I can honestly say that it will have fans across the U.S. falling in love with this British sweetheart. Although I can’t give too much away, I will say that college students will soon have ten songs to add to their favorite playlists, and—to those of us starving for inspiration—be prepared for some serious vibing.
FacebookTweet
Celebrity Advice Life

Previous Post:Cleaning Up Your Dirty Talk
Next Post:Copenhagen 2012: Disney and Creepy Collide in Prague