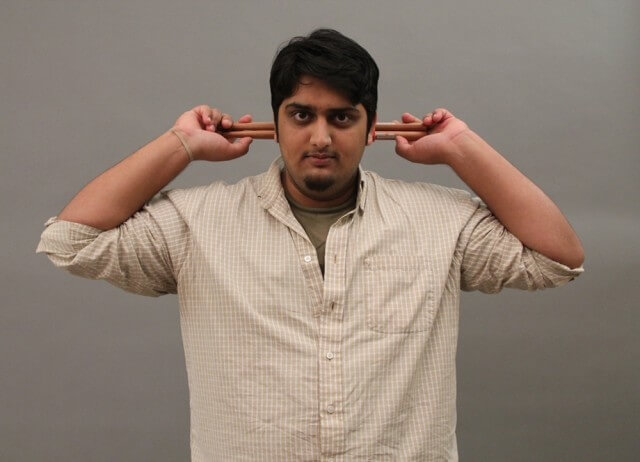 The reputation of a young musician has seldom faltered over the past decades. While attending college is much more widely accessible and affordable, thousands avert this option every year and set out to pursue a career in the music industry.

Although many who take this option often end up gaining a strong knowledge of the local bar scene rather than musical engineering, musicians like YouTube sensation Anup Sastry represent a new generation of student performers. These are artists who are educated in the different aspects of the music industry, and understand how the Internet can be used to reach listeners as well as other musical groups, and create connections that would have been unattainable just ten years ago.

Sastry spoke to College Magazine and told us all about his growing viral popularity producing drum covers of popular songs along with original work, and the challenges young adult musicians face in their pursuit of industry success in today’s music world.

CM:  First things first. How long has it taken you to become this skilled on the drums? What made you start playing the drums in the first place?

Anup Sastry: I have been playing drums since I was about 11 years old. The first time I heard the  snare drum I thought it was one of the coolest things I had ever heard! It completely blew my mind.

CM: How do you select which songs to cover, and what goes into learning it well enough to recreate it?

AS: The majority of the songs I cover are usually songs that I really enjoy. Sometimes, I find my self notating drum parts before hand, but other times, I will learn a song by ear. I will loop a verse, for example, and work on it until I can play it. Then I move to the next part in the song, and then the next part, etc.

CM: Some of your YouTube videos have over 30,000 views. How has media sharing and social networking sites helped artists like you share their music with listeners versus a decade ago when these communities didn’t exist?

AS: Social networking and media sharing are a beautiful thing! I feel that Youtube is my resume in way, and all of the artists and bands that I currently work with today are because of the internet. Sites have even launched solely intended to help artists gain an online following, such as Bandcamp and Soundcloud.

CM: Are you currently enrolled in college? if so, what are you majoring in? Is multitasking everyday life with your growing music resumé ever hard to handle?

AS: Although I am not currently enrolled in school, at one point I was dually enrolled in community college as a music major and trade school at night for audio engineering and live sound. Multitasking has always been difficult to handle, but I enjoy the challenge! I just do my best to manage and use time efficiently.

CM: Have you ever thought about pursuing a career in music? Or is it just something you are passionate about?

A: After my first semester attending college as a computer science major, it hit me that I didn't want to do that at all, so that’s when I switched gears towards music and audio engineering. Today, all of my income is made from either touring or producing and recording bands. I plan to keep doing this for as long as I live!

CM: Have any songs that you’re looking into for your next cover?

AS: I’ve been wanting to do a video of me jamming out to a Kanye West’s song “Monster”!

CM: Ever perform live? If so, where?

AS:  Recently, I was in India performing with a band called Skyharbor. We opened up for Lamb of God in Bangalore this past May, and before that we played the NH7 Bacardi Weekender. This past spring, I was on a U.S. tour with Jeff Loomis, and we plan on going on another way going back out this Summer.

Check out Sastry’s (and others) cover of Katy Perry’s ET and an original song by the drummer. Tell me he’s not awesome–I dare you!

Previous Post:How To Catch His Eye
Next Post:The Diary of a Bonnaroo Survivor