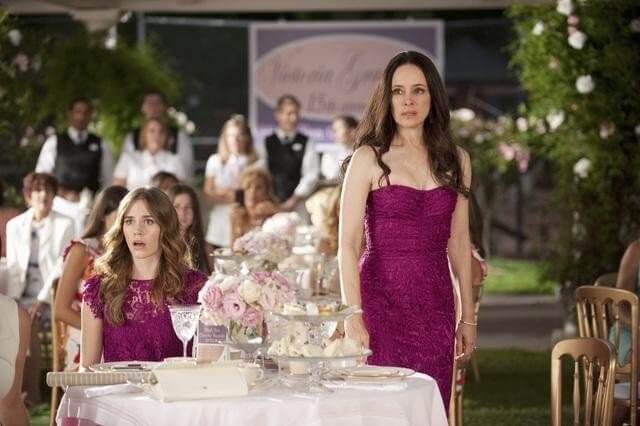 ‘Revenge’ is Sweet with Christa B. Allen

Revenge has never been sweeter. No, I am not talking about how well the ABC primetime soap is doing in the ratings. I am talking about up-and-coming actress Christa B. Allen’s portrayal of Charlotte Grayson, a misunderstood teenager clamoring for love and acceptance in the Hamptons.

Nineteen-year-old Allen is no stranger to the television screen. One may recognize her from her stints as a young Jennifer Garner in both 13 Going on 30 and Ghosts of Girlfriends Past as well as guest appearances on Grey’s Anatomy and Cold Case.

Allen reflected on her 13 Going on 30 experience: “Time of my life. That was my first big Hollywood project. I didn’t know what was going on around me, I was just there to have fun. At 12 years old, you just want to have fun, and so I did. It taught me a lot and gave me a good setup for the rest of my career.”

However, her character on Revenge is far more complicated than that role from her childhood. Charlotte, a rich, spoiled Hamptons teen, recently found out her mother Victoria (Madeline Stowe) secretly wished she never gave birth to her.

“As you’ve seen with Victoria and Charlotte, there’s been a lot of tension,” Allen said. “Victoria hasn’t been the most supportive mother. Charlotte starts to lash out against that a little bit, and kind of go about her own way and figure out what makes her happy. No kid wants to hear they aren’t wanted. I’m glad Charlotte can forge her own path here on out.”

Allen, the youngest of nine, has eight older brothers, and although she is closer with some more than others, she said they are a very close family.

In addition to her relatives, Allen and the cast of Revenge have a unique but excellent chemistry, both on and off the screen. “We’ve worked together everyday on set, we hang out after work,” she said. “We’ve been seeing each other almost every weekend. It really is a little family, no egos involved. Nobody makes anything exclusive whatsoever; we’re all on the same page. It’s like no cast I’ve ever worked with, and it’s the same experience for them, they’ve never gotten along this well.”

Allen said that her fellow cast members are brilliant mentors. “Madeline [Stowe] of course is brilliant and has so much to teach me not only as an actress but as a person. She has a 16-year-old daughter herself, and she is an amazing woman,” Allen said.

PAST, PRESENT AND FUTURE

Although Allen has not gone to college, she hopes to find time for her studies in the future. “I don’t know what I want to study, because I love everything. Eventually, yes I want a degree,” she said. “I’m open to taking time off of my work because nothing can replace being a well-rounded, educated person.”

She also opened up about her views on life and why Revenge is a show people can relate to: “We’re all people on this earth going through similar experiences. It’s worth opening up to and realize we’re all in the same boat together. We’re not alone. I think that’s why people are drawn to Revenge. There’s a character and an experience that everyone can relate to.”

Catch Allen on Revenge Wednesdays at 10 p.m. on ABC.

Previous Post:From High School Senior to College Freshman
Next Post:Missouri Makes The Jump To The SEC