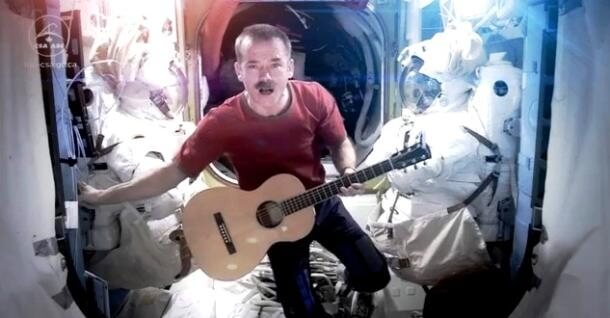 This is Ground Control to Commander Chris: You've really made the grade.

The Canadian astronaut Chris Hadfield has been no stranger to the world since blasting off on Expedition 35 to the International Space Station on March 15. The social media-savvy spaceman regularly tweets pictures of Earth from orbit and even did an Ask Me Anything on Reddit from the Baikonur Cosmodrome prior to launch.

While Commander Chris has stacked a mountain of heartwarming tidbits for his online following to relish, he took his most giant leap for mankind Sunday evening.

He made a music video. In space. Covering David Bowie’s 1969 smash-hit “Space Oddity.”

Bowie’s original rose to fame less than four months after Neil Armstrong put that first boot on the Moon and rode the wave of popularity generated by the Space Race. Hadfield’s less-than-extravagant cover comes in an age when NASA’s funding has been slashed and every astronaut and their brother has to bum space rides with the Russians.

By David Bowie standards, the original “Space Oddity” is fairly subdued. It illustrates the conversation between two men while the extraordinary feat of spaceflight happens on Major Tom’s end of the line.

David Bowie was in a London recording studio. Chris Hadfield is in the International Space Station. He is living the song.

The most tear-jerking quality of Commander Chris’ video is it’s simplicity. Bowie’s original tells of a lonely man high above the world that made him. Chris Hadfield is that man in real life, and at the time of this article is still hurtling through orbit looking back at all of us in isolation. He’s not a musician, and more importantly he’s not simply an astronaut.

His song is simple. He’s armed with only a guitar, his natural voice, and a song he’s certainly heard a thousand times growing up. It’s an ensemble not unlike those found around campfires and impromptu jam sessions across the globe. Commander Chris took something that makes us distinctly human into the final frontier: music.

The haunting scene of Chris’ guitar floating free (beginning at 1:07) best materializes it. As much as we’d like to think we have a foothold on our understanding and dominance of the Universe, we’re unbelievably simple.

For all the equipment hauled, dollars spent and research developed, the most endearing, educational and memorable entry in Expedition 35’s log will be the skinny Canadian man in a red t-shirt and socks strumming his guitar. The social media wonders of 2013 are going to spread this video like wildfire, and because of that we can all become the Ground Control he’s addressing.

In a video posted earlier this year before launch, Hadfield explained the reasoning and importance of bringing the guitar on board. When you’re screeching through space over 17,000 MPH holding orbit well above 250 miles over Earth, picking a few cords by the porthole could definitely have its therapeutic uses.

That’s what sets Commander Chris apart from everything around him. He’s a human. He’s not painted a sterile white and checked for heat resistance. He’s bones wrapped in meat in a situation humans are not meant to survive.

That’s what makes this endearing and heart-breaking. With all the procedures and training aimed to keep Chris Hadfield alive, it takes a simple thing like music to make him happy. It takes simple things like that to make any of us humans happy whether we’re having a bad day down here or a bad day up in the sky.

We’re humans, and we rock.

Photos from news.cnet.com and listener.co.nz