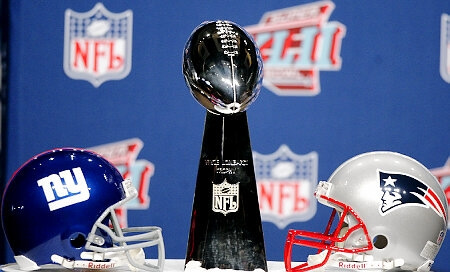 Patriots 23, Ravens 20: A dropped catch and a shanked field goal proved to be the difference for the Ravens, who were three points shy of sending the AFC Championship game into overtime Sunday. But these two miscues with 22 seconds left in the game helped the Patriots cling to a 23-20 victory and return to the Super Bowl for the first time since 2007.

Tom Brady looked extremely ordinary, failing to throw a touchdown pass for the first time in 36 games, but his go-ahead one-yard sneak into the end zone gave the Patriots the lead in the fourth quarter. The Pats won their 10th win in a row, and Brady matched Joe Montana for most playoff wins with 16. He and coach Bill Belichick became the first quarterback-coach combo to reach their fifth Super Bowl together.

With the game in the balance, Joe Flacco did his best Tom Brady impression, driving the Ravens down the field with a chance to tie or regain the lead. Backup cornerback Sterling Moore stripped a sure touchdown strike to Lee Evans in the end zone after getting burnt earlier in the game. Then, Billy Cundiff botched a routine 32-yard field goal wide left, the third-shortest missed kick in the final 30 seconds of a game in postseason history. Yet again, the Ravens’ season early yet again.

Giants 20, 49ers 17: In an NFC Championship showdown, you might expect Eli Manning or Alex Smith to make a clutch throw, or one of the many defensive stars to force a key turnover. Instead, it was a fumbled punt, forced by a rookie and snatched up by a role player who makes his living on special teams that put the Giants in position to keep a game-winning field goal in overtime.

A strip by Jacquain Williams and a recovery by Devin Thomas positioned the Giants on the 24-yard line, which eventually led to the decisive 31-yard field goal that lifted a 20-17 win. The victim, Kyle Williams, who filled in for the injured Ted Ginn at punt returner, watched as the game unfolded. A quarter earlier, he muffed a punt that translated into a Giants touchdown.

The Giants have reeled off five consecutive wins since their Christmas Eve bout with the Jets. They also notched their fifth straight road playoff victory, a streak that began in 2007 when they defeated the Patriots in Super Bowl XLII.

What to look for: The Giants-Patriots rematch in Super Bowl XLVI very much has the déjà vu feeling it did four years ago. The Patriots are not the same undefeated juggernaut they were, but they are on a league-best winning streak and are installed as early three-point favorites.

The Giants have taken an eerily similar path to the Super Bowl as they did in 2007, climbing from No. 4 seed to beat the No. 1 and 2 seeds on the road. Manning is the only quarterback in NFL history to have this sort of success in the postseason on the road.

In a Week 9 showdown, the Giants topped the Patriots, 24-20, with a one-yard pass from Manning to tight end Jake Ballard with 15 seconds remaining. The main storylines include Brady avenging the 2007 matchup, the Pats’ high-octane offense against the Giants’ blitz-heavy defense and Manning continuing to prove he’s an elite quarterback in the league.