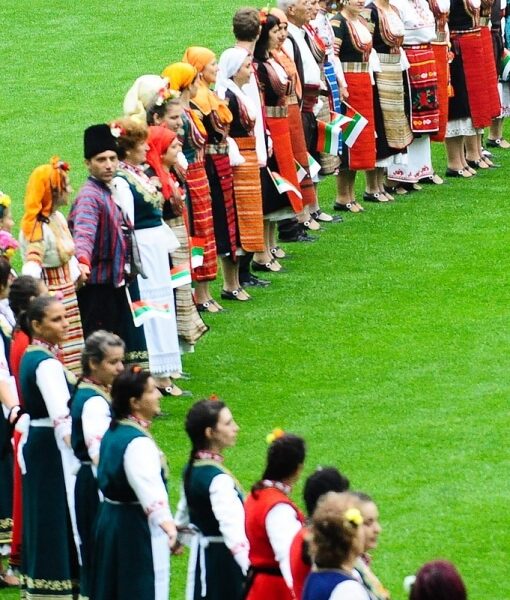 The World Culture Festival, presented by Art of Living Foundation, took place at Berlin’s Olympiadon on July 2 and 3.  The event, the largest world peace meeting of its kind, was held to celebrate culture, pursue peace and find harmony.

In Berlin, four pavilions were set up outside of the Olympiadon to represent each of the geographical regions attending the conference — Africa, the Americas, Asia-Pacific and Europe.  Each region had an assortment of acts from music to food occurring throughout the weekend.

Many political representatives attended, including U.S. representatives Nancy Pelosi (D-CA), Danny Davis (D-IL), Mike Quigley (D-IL), Janice D Schakowsky (D-IL) and Joe Walsh (R-IL).  Former Netherland’s Prime Minister Ruud Lubbers was also present.  The European parliament and other governments from around the world were represented during the festival as well as a sign of unity.

By filling out an application online, an attendee could participate in cultural acts like a 250-person German folk dance, a 500-piece African drum performance, a 1,000 person Lithuanian dance or watching the St. Petersburg ballet from Russia.

Music and dance have been integral parts of our lives for longer than history allows us to know.  Dance lets the performer to share emotion with an audience without connecting through language.  Music, whether conveyed through instruments or voice, also expresses emotion we may not be able to share in conversation.  Even if a performer and observer do not share a language, emotion is expressed through face and body movements, allowing participants from all over the world to enjoy unique opportunities and shared experiences.

Art performances included 30 pianos on stage at once, a 2,000 guitar ensemble performing Amazing Grace and Hare Narayana as well as a 1,000-person traditional Bulgarian “Horo” dance.

70,000 people were expected to attend the World Culture Festival and participate in a group meditation for world peace.  One thousand yoga teachers, each presenting a different technique, led the event.  There was a yoga tent outside the Olympiadon for performances and workshops throughout the weekend.

Classes, available for a small fee, included The Art of Breathing, The Art of Silence, Youth Empowerment (14-30 years old), An Evening of Wisdom, Meditation and Music, and Journey Towards the Self.  Some will be taught by Sri Sri Ravi Shankar or instructed in his presence.

Sri Sri Ravi Shankar, founder of Art of Living, is an international humanitarian and spiritual leader and was the inspiration for the event.  He believes in non-violence and non-stressful ways of living while focusing on the importance of conflict-resolution.  He emphasizes human values and is an advocate for multicultural education as a remedy for fanaticism. The World Culture Festival sought to bring peaceful cultural awareness to the forefront of global consciousness.