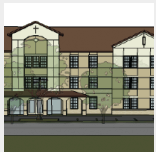 Two secular universities will now offer Catholic housing options for the fall semester, under the funding of The Newman Student Housing Fund.

The Newman Student Housing Fund, an organization that aims at building facilities where students can practice their faith in housing environments on secular campuses, works with universities in every step of the housing creation process, from developing blue prints to providing the necessary means, according to it’s website.

Florida Institute of Technology and Texas A&M Kingsville are creating the dorms to offer students of the Catholic faith a chance to live in a housing environment that encourages them to stick to their faith throughout college.

A 2007 report by the Social Science Research Council showed that college students’ attendance of religious ceremonies has decreased in recent years, therefore many private universities are making efforts to help revive students’ connections to their religions, according to Huffington Post College.

Before now, the University of Illinois at Urbana-Champaign had been the only secular university to offer Catholic housing options. Illinois’ dorm houses 586 students, making it a much larger housing option than the ones planned for FIT and Texas A&M, which will hold 140 students and 287 students respectively, according to Huffington Post College.

The Newman Fund is allegedly planning to fund Catholic housing options for other universities, according to Huffington Post College.