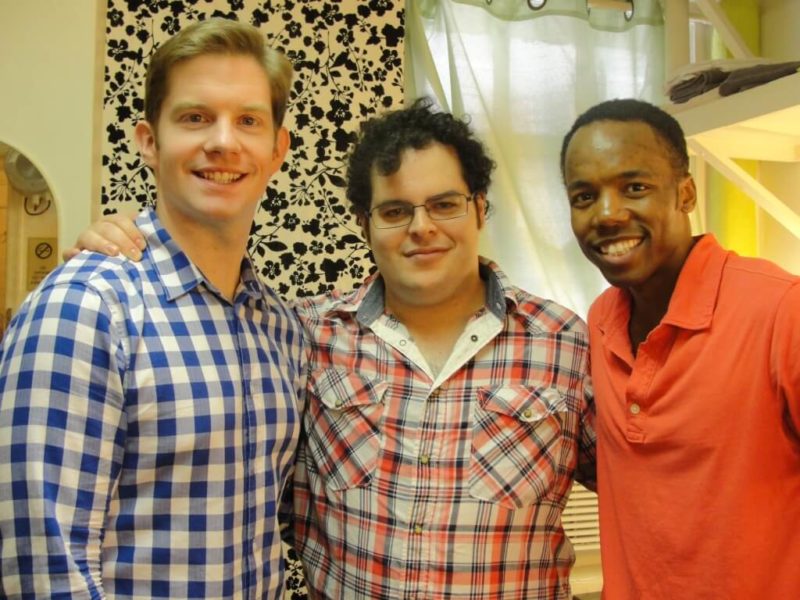 Catching up with The Book of Mormon Cast

Josh Gad probably never thought that he would sing a sexy song about a baptism, make up stories about God commanding the founder of the Mormon Church, Joseph Smith to do unspeakable things to a frog, or belt out lines like, “Watch me man up like nobody else!  I’m gonna man up all over myself!”  I still have no idea what that means and I doubt anyone involved with The Book of Mormon knows either.

One thing Gad was probably even more unprepared for was becoming one of Broadway’s most recognizable faces.

“It’s a little mobbed out there,” Gad said after battling crowds outside a recent special afternoon fan show at the Eugene O’Neill Theater.  “People tried to date-rape me.”

“You kind of figure that if [I’m going to be recognized] it’s going to happen in that kind of demographic.  It worked out great.”

During the segment, Gad shared an intimate moment with his costar and former roommate at Carnegie Mellon University, Rory O’Malley.  It involved a lot of tongue and, as Gad said of a semi-kiss between him and his openly gay friend, “Anarchy!”

“I had to do a lot of prodding and convincing,” said Gad.  “Get out that sexual tension on camera.  Fact of the matter is, it was a blast.  I knew I had to do the gag and there was only one person I was going to call to do it.”

CMU, a prestigious private school in Pittsburgh that keeps churning out theater people, is represented in almost every Broadway production, particularly in The Book of Mormon cast.  Besides Gad and O’Malley, Tommar Wilson, Rema Webb and Asmeret Ghebremichael are CMU alumni.  The two former roommates and Wilson sat down in O’Malley’s dressing room before their fan show to discuss their experiences on this Tony Award-winning play.

The Book of Mormon follows two Mormon missionaries (played by Gad and Andrew Rannells) who are assigned to a poor village in Uganda to convert the indigenous population to The Church of Jesus Christ of Latter Day Saints.  It was written by Trey Parker and Matt Stone of “South Park” fame, in collaboration with Robert Lopez, one of the warped minds behind the Tony-winning Avenue Q.

The show is a hilarious and biting satire of the lunacy of taking religious works like the titular Book of Mormon literally and tries to remind the audience that having faith in something — no matter how seemingly ridiculous those ideas are — is still important.  As with anything from the “South Park” team, it contains just enough sweetness and catchy tunes to override the vulgarity, random pop culture references and overuse of the word “clitoris.”

“I had seen a reading of the show at the Vineyard maybe two years ago,” said Wilson, the only one of three who had to audition.  “I knew kind of what I was getting into, but the first day of rehearsal, they basically did a run-through of the show … and I didn’t realize how f*****g hilarious it was until that day.  It blew my mind.”

O’Malley, whose character’s shtick is repressed homosexuality, said, “I never actually have to say anything bad.  I have to do something probably horrible with Hitler.  We all have our moments.  Bobby Lopez, Matt and Trey were so meticulous about getting the story right and making the characters rich that everything is earned.”

After earning laughs on stage, The Book of Mormon continued its earning streak by winning nine Tony’s, including Best Musical, Best Score, and Best Featured Actress in a Musical for Nikki James.  Being at the Tony’s was “totally surreal” for O’Malley.

“It was the greatest night of our lives,” he said, a sentiment echoed by his costars. “That Best Musical Tony is something that isn’t just ours.  It’s the wardrobe people; it’s everyone in the building who has worked so hard for three years.  So we all feel a sense of ownership.  This show is a part of me.”

As Gad put it, he and O’Malley “have been involved in this show in some capacity for as long as the duration of our college careers.”  It’s safe to assume that they have amassed a mountain of anecdotes at this point.

Wilson and O’Malley immediately turned to Gad at this point: “Josh, pray tell.”

Gad laughed knowingly before beginning his story: “There were two days in a row where a song I’d been singing for over a hundred performances I decided I no longer knew. It just became the most difficult five minutes of my life.”

Gad appeared to be the resident prankster of the Eugene O’Neil Theater.  One of his running gags is to constantly mispronounce Nikki James’s character’s name (Nabulungi, a nightmare to say on its own).

“I definitely mess with people onstage,” Gad admitted.  “I would say I’ve come up with 25 to 30 different names for her.  My favorite was Nipplecream.”

“My favorite was Nathanlane,” O’Malley chimed in.

Gad chuckled and continued:  “Sometimes I’ll really debate it and sometimes what comes out is uhhhhhhhhhhhhhh.  That’s when Nipplecream popped out.  It was the first thing that popped into my head.”

Wilson has a very unique problem that most men would kill to have.

“My problems all center around my big penis in the second act,” Wilson somehow said with a straight face.  “It doesn’t sit right some days.  It started coming off the other day and one of the stage managers had to tape it on.  That’s really my only issue, it’s the penis.”

Believe it or not, that all makes sense.  Wilson plays both a gun-toting bodyguard of General Buttf*****g Naked (Yes, that is the character’s name) and one of the villagers who has simulated sex with strap-ons during one number.  Again, that all makes perfect sense in context.

Never one to be story-topped, Gad interjected with his own tale of terror involving Wilson.

“My favorite moment with Tommar is every day we have this little intimate moment that nobody else knows about,” Gad said as a look crossed Wilson’s face that could only be described as horrified anticipation.  “When he comes out with the gun and he’s wearing those gold bullets, I go, ‘Beautiful necklace, Tommar.’”

Gad pretended to gingerly stroke a fake bullet clip around his neck.  Wilson smiled and retorted with: “I go, I’ve got a gun, assh***.”

As much fun as the cast is clearly having, they know their ultimate goal is to put on a show.  They also know that their brand of humor is an acquired taste.

“There were two people in the front row stage right yesterday who I could not take my eyes off of because they were miserable,” said Gad, who sounded genuinely perplexed.  “It was fascinating to me because, I mean, they couldn’t be that miserable if they’re staying until the final bows.

What valuable lesson did I take from the The Book of Mormon?  The book itself sounds incredible.  In the play’s big show-stopping ballad, Rannells sings about everything that he, as a Mormon, believes on faith alone.

Ancient Jews building boats and sailing to America?  The Garden of Eden being in Jackson County, Missouri?  A God living on a planet called Kolob who, in 1978, changed his mind about black people?

If marketed right, it could become the next Harry Potter.