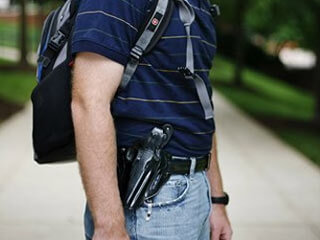 Bring Your Gun to Class – Soon students might be able to

Most days students find themselves waking up in the morning, late for class with only a few choice moments to pack the daily essentials – books, food, keys, phone, and… a gun?

Allowing students to carry concealed weapons on several college campuses is fast becoming a very real possibility. According to an article from USA Today, 14 states have proposed 35 bills this year that allow students and faculty to carry concealed weapons on state colleges and universities or loosen restrictions on gun bans. Whether the laws are passed or not, the effect of the decision on campuses depends on if the college or university is private or public.

None of these bills have passed yet and so far, Utah is the only state that lawfully allows concealed weapons on state campuses. Texas alone has presented six bills this year that would make it legal to bear arms on campus.

Though concerns about campus security have taken a noticeable increase, after tragedies on campus such as Virginia Tech in 2007, many students feel that events like these are precisely why concealed weapons should be allowed on campus; as a means of further, personal protection in dangerous situations.

However, other states stand firmly against relaxing regulations on gun possession on college campuses. Maryland and Washington have introduced bills to prohibit guns on campuses, neither of which has been passed yet.

This divided opinion on the matter has been an ongoing debate. Last year, nine states introduced bills that legalized gun carrying on campus while another nine states proposed barring the practice completely.

Safety is an essential part of day-to-day life for every college student, whether they recognize it or not. Either way students look at it, with the impending possibility of some of these laws passing, there will be more fire arms on campus that students won’t necessarily be aware of. This will require students to be even more diligent about safety and aware of their surroundings then they have been in the past.

Previous Post:Putting Up a Good Fight
Next Post:SGA: What You Can Do For Your School