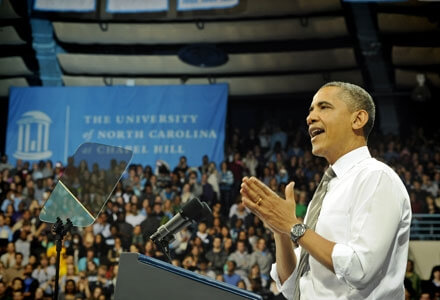 In an effort to reignite the passion that America's youth had for his campaign in 2008, President Obama has been speaking with students on college campuses about his own struggle with student loans. Yesterday, on April 24, he spoke to students at the University of North Carolina, Chapel Hill.

Obama also took the opportunity to remind his audience that his likely opponent in the 2012 election, Mitt Romney has not had to struggle with debt. The multimillionaire son of a former auto executive and Michigan governor, Romney likely did not face difficulties paying for college.

The president is currently on a two-day trip with stops in Iowa and Colorado to campaign and raise awareness about his effort to get Congress to extend low interest rate on college loans to more than 7.4 million students.

If no action is taken, then the student loan rates will bounce to a whopping 6.8 percent on July 1–a situation Obama hopes to avoid, especially if he wants to secure the young people vote that helped get him elected in 2008.

"Given the bleak job prospects that young Americans coming out of college face today," he said, "I encourage Congress to temporarily extend the current low rate on subsidized undergraduate Stafford loans. I also hope the president and Congress can pass the extension responsibly, that offsets its cost in a way that doesn't harm the job prospects of young Americans."