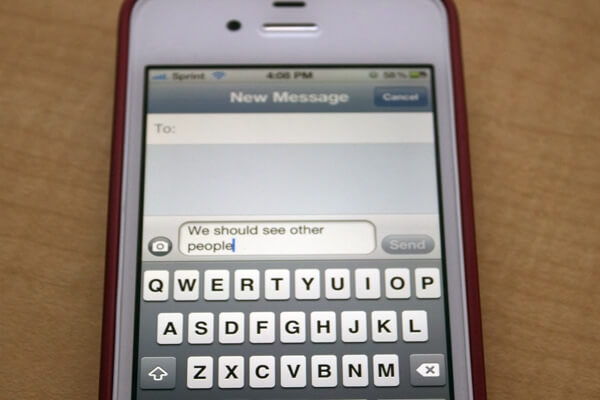 January marks the beginning of cold times- and not just in regards to the weather. January is officially known as “break-up month.” Studies show that six out of 10 couples will break up during the beginning of the new year.

Why the harsh reality? Many would think that happy feelings shared over the holiday would spill into the month before Valentine’s Day. The opposite seems to be true. “There is no study explaining exactly why couples tend to break up during January," said Ben Karney, a professor of social psychology at the University of California, Los Angeles. Instead, Karney believes that there are three factors that can help others understand what leads to the end of relationships: stress, separation, and new resolutions.

First, college students can blame finals for hurting more than just their GPA. “There are two peaks when relationships tend to end for college students: winter break and summer break. What tends to precede these breaks? Finals. What do finals bring? Stress," said Karney. “People tend to learn a lot about their partner under times of stress and see if their partner is reliable or not.”

Second, college students learn that absence actually doesn’t make the heart grow fonder. Break leaves a lot of couples separated from their partners when they go home. “Separation makes people anxious with their relationship. When they’re alone, they get perspective and a time to reflect,” explained Karney.

Finally, a factor that seems to really coincide with January is the new years resolutions. “In January, when people contemplate the new year it is a time where people make resolutions and take the time to reevaluate their relationship,” said Karney.

Many students agree that when a new year brings in new resolutions, a relationship seems to be one of the first things people want to change.“Maybe someone wants a fresh start. One party might want to figure out what they want,” said Erica Sequeira, a sophomore at the University of California, Riverside. “Breaking up in January gives them the rest of the year to find someone else to give them Christmas gifts by the end of the year.”

“It’s the start of a new year and people tend to reevaluate their decisions and what they are doing with their lives. It's a fresh start and a chance to make a change,” said Hannah Sherman, a sophomore at the University of California, Berkeley. “Taking a break from school allows you to get perspective because I think couples during the fall get stuck in a routine and it can be hard to break away from that.”

Sherman, unlike many, knew it was time to break things off with her boyfriend well before the holiday season. “I needed to refresh and separate myself from stress, from school and my relationship,” said Sherman. “Holidays are supposed to be about family and celebrating the year and they allow you to figure out what's important to you. A lot of times relationships end around then because people realize that maybe they aren't really interested in investing so much effort into a college relationship.”

So what do you do when you realize that your relationship has fizzled out before break? If you are one of the many who think that you’re doing the other person a favor by waiting until after the holidays to break up, think again.  “If you know things aren't working out and that things won't be going anywhere anymore, then just end it,” said Chelsea Calleja, a sophomore at the University of California, Riverside. “There's no point in continuing a relationship if feelings aren't mutual. Sometimes it's better to be ‘alone’ than to be in a relationship that isn't working.”

“It’s not fair to take advantage of someone else's feelings just because you are trying to figure out your own,”said Sherman. “You should give your partner the chance to start off their new semester with a fresh start, and making them hold on over the holidays to inevitably hurt them anyways isn't right.”

What happens if you’re on the opposite side of the break up? “Try not to let this derail your life,” said Karney. “A new year means a fresh semester. Dive into your work.” Straight A’s may not heal a broken heart, but it could help.