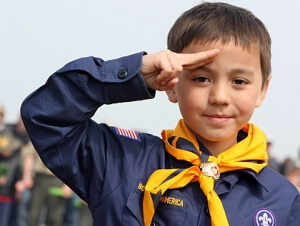 Several months ago, Boy Scouts of America released a statement that said openly gay Scouts and Scout leaders should not apply. As one of the largest private youth organizations in the United States, BSA has legal rights through state and federal court allowing it to uphold its anti-gay policies.

According to an article by NPR, the organization has started to see major donors withdraw. Although these actions may be the cause for the Boy Scouts rethinking its stance on homosexuality, the article says that BSA has not disclosed its reason for considering the policy change. Deron Smith, an advocate for the Boy Scouts, stated that the organization's board of directors "is discussing potentially removing the national membership restriction regarding sexual orientation."

Alexa Patsalis, a freshman at the University of Michigan majoring in political science and Near Eastern studies, says that this situation represents where American society currently exists on the issue of equal rights for LGBT. “We are going to see these sort of situations come up where an institution, like the Boy Scouts or a school, spouts an exclusive policy,” says Patsalis, “and due to public backlash and public pressure, they will be forced to reverse their policy.”

Patsalis, who plans to spend her spring break in New York City at a homeless center for LGBT youth, says she has been paying attention to this story as it unfolds and has seen a lot of public momentum to get the ban lifted. “My belief is the lift of the ban will happen, but I am not sure it will come out of a sincere place,” Patsalis says. “I believe it will be an attempt to maintain their financial sponsors and save face in the scrutiny of the public. With that being said, it will be a step in the right direction.”

Eagle Scout Zach Wahls, who gained popularity online after he spoke at the Iowa House of Representatives about same-sex marriage, started an organization called Scouts for Equality. Through a Change.org petition Wahls successfully convinced Intel, one of the biggest corporate sponsors to the Boy Scourts, to stop its endorsement and funding to the organization.

Despite the withdraw of Intel and other supporters, Tyler Akeo, a junior at Michigan State University studying apparel and textile design, does not see BSA reversing its ban on allowing gay Scouts and troop leaders. As an ally to LGBT and a former president of LIGHT, an LGBT organization, Akeo feels that the Boy Scouts are negatively influencing society. “Even if its not intentional they are teaching future generations that bigotry and hate are acceptable as long as you hide behind a banner of ‘personal belief,'” says Akeo.

Akeo believes that if the Boy Scouts was to change its stance, it could put them on par with the Girl Scouts of America which already accepts both lesbian and transgendered females. “It would also teach that just because a person or group of people may have held tight to their hate and bigotry, people can still change for the better,” Akeo says.

Tyler Bradley, a third year graphic design major at Saginaw Valley State University also said that BSA should lift its ban and allow all youth and leaders to have the same opportunities. “Many places don't have leadership programs of such good caliber as the Boy Scouts,” said Bradley, member of Living Proud at SVSU. “LGBT individuals who want a chance at being involved, to learn and be active young citizens, can either play along and never mention a thing about their [sexuality], or settle for not being involved.”

Bradley believes BSA sets an idea in these young leaders minds that it’s okay to treat those with different sexual orientations like a second-class citizen. Reversing the ban could be a chance for the Boy Scouts to positively influence the gay community. “It'll help get rid of some of the negative stereotypes of LGBTs,” says Bradley. “While some of these youth may not be fully aware of how they identify in terms of sexual orientation and gender identity yet, it'll definitely allow them to be much more comfortable talking about it with others.”

According to Patsalis, allowing gay leaders to choose to disclose their orientation will help in breaking stereotypes. “Stereotypes come out of fear,” she says. “By interacting with a gay leader, the Scouts will realize that your sexual orientation doesn't necessarily have anything to do with your personality or actions or morals. The lift of the ban, I believe, would promote inclusion and acceptance.”

Previous Post:Gifts for the Girl in Your Life
Next Post:Why I Miss Elementary School Valentine’s Day