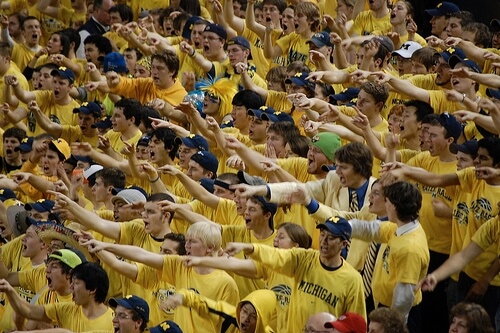 It looks to be a three horse race for this year’s Big Ten crown, with a fourth contending team on the horizon.

Ohio State, Wisconsin, and Michigan State, all perennial powers in the Big Ten Conference look to rule the conference once again, but look for a scrappy Michigan team to give the big three a run for their money.

Ohio State is one of the favorite this year to win the Big 10 championship. The key to their expected domination of the conference is the return of power forward Jared Sullinger. Considered by many a potential top 5 pick in the last NBA draft, Sullinger chose to remain in Columbus for his senior season rather than bolt for the pros. Sullinger isn’t expected to do all the work for the Buckeyes though. Sophomore forward Deshaun Thomasi s poised to put up big numbers this season. The Buckeyes’ experienced players should provided the guidance necessary for the buckeye’s strong freshman class.

The most difficult road block on Ohio State’s path to the championship looks to be Wisonsin. The Badgers success depends heavily on the ability of Wisconsin’s secondary players of last season to step up as starters this season. The Badgers lost three of their starters last season, but return a strong team regardless this year. If big men Mike Bruesewitz and Jarred Berggren can take their play to the next level, the Badgers have a better chance of beating the other championship contenders in league play. The team also places much of its hopes in  returning senior guard Jordan Taylor, one of the best players back court players in the country..

Michigan State experienced a disappointing season last year amid high expectations. Their failure to meet high expectations have tempered projections for the team this year. Like Wisconsin, the Spartans’ success is dependent on the play of their front court. Junior center Derrick Nix  and Sophomore center Adrien Payne need to fill in the gaping defensive hole left by the departure due to injury of star defensive player Delvon Roe. Standout senior forward Draymond Green should help to fortify the Spartans’ front court.  Michigan State’s guards are also relatively fresh-faced players who could make an immediate impact. Sophomore guard Keith Appling and  transfer Brandon Wood will anchor the back court for the Spartans.

While Michigan State disappointed last year, their neighbor, the Michigan Wolverines surprised by playing above expectations. The Wolverines only finished 9-9 in the conference last year, but completed the season with an overall record of 21-14 and came within a shot of the  NCAA Tournament’s sweet sixteen. Michigan looks to continue with that winning theme this year. Much of Michigan’s success depends on how well Sophomore guard Tim Hardaway Jr. can fill the hole left by Darius Morris who departed for the NBA during the off season. The popular belief is that Hardaway should fill the role well and that he has the potential to lead the Wolverines in scoring this season. Michigan will also feature senior guards Zack Novak  and Stu Douglass. Experience should be a strength int Michigan’s quest to dethrone  Ohio State, Wisconsin, or Michigan State.

There is a significant drop off in expectations for big ten teams after the  expected top four finishers. Purdue and Illinois are expected bubble teams for the NCAA tournament. The Boilermakers lost star players JuJuan Johnson and E’Twuan Moore to the NBA in the off-season and will need to rely heavily on secondary players of last season to step up. Inexperience will be the Fighting Illini’s worst enemy as they fight for a coveted spot in the annual tourney.

Neither Northeastern, Iowa, Indiana. Nebraska, Minnesota nor Penn State are expected to contend for any kind of championship. All these teams figure to be fighting for a prime spot in the NIT tournament. The 2011-12 season will mark the first for Nebraska in the Big Ten Conference. It should take the Cornhuskers at least a season to adjust to the ways of their new conference.