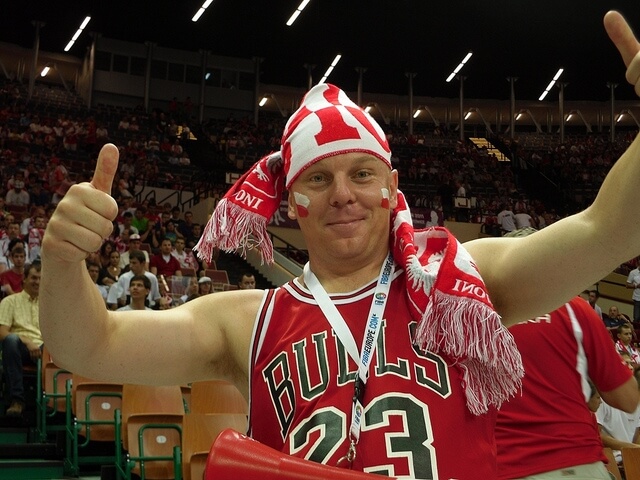 Fan is short for fanatic. There are very few things in life that make us as emotional as watching our favorite team play. A close second: The Notebook. Not surprisingly, combing our own money with our emotions towards our favorite team is as about as good an idea as Rachel McAdams marrying Bradley Cooper in Wedding Crashers.

It’s never smart to mix business and pleasure, and only a few things can get you in more trouble than making it a habit of betting your favorite team. Here’s why: Fans cannot accurately judge their favorite team. This is a rule with very few exceptions. There are two different types of fans.

A) Fan A is an individual who sees no flaws in his team. You will see this fanatic take part in heated debates in the hall, the bar, the living room or any place where there is someone willing to dare say his quarterback isn’t elite. You might bring up that his quarterback throws more interceptions than touchdowns, or that his defense cannot get a sack without blitzing. He, of course, then counters by telling you that his team never gets any calls and if they did they would easily beat any other team in this league. Since Fan A doesn’t believe his team can be beat, he doesn’t care the point spread; whatever the matchup, his team is a lock. Homers like Fan A are one big reason Vegas is so successful. B. Fan B is an individual who is more pessimistic than Kevin Spacey in the beginning of American Beauty. But instead of going through a personal transformation after meeting a hot young girl, Fan B continues to doubt his team no matter how often they prove him wrong. Similar to how Fan A will find any excuse to explain away his team’s weaknesses, Fan B ignores all logic and reason in finding ways to keep his zero faith in this team. Fan B holds this view due to deeply entrenched psychological issues that cause him to fear true happiness. As a result, Fan B always expects failure from his team and finds pleasure in betting against them in a kind of self-destructive hedging your bets kind of way. Again, this individual should not be betting money on his “favorite” team.

Like I’ve said before, betting on sports is a fun way to make uninteresting games into games you cannot turn off. But when it comes to your favorite team, you don’t need any extra reason to watch the game. Save your money for the games you are not as emotionally attached to. A general rule of thumb is that if you refer to your team as “we” you should never place a bet for or against them.

If you are thinking, well I don’t fit in any of those fan categories; I have a favorite team but I can objectively evaluate them and rate them fairly, accurately and with respect to the other teams in the league, and my days are not made or ruined because my team has won or lost. Well, then I would argue you are not a fan at all. You are reasonable, logical and live a healthy lifestyle — nothing about that sounds like a sports fan.