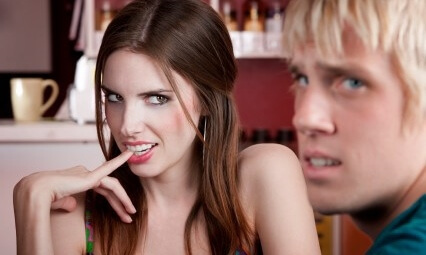 Best Friend Looking to be Girlfriend

I recently was asked if I was going out with my best guy friend, which made me think that maybe I do like him. We've been friends for over a year, and we get along great, but I'm afraid that if I do flirt with him to see if he does like me, it'll freak him out and make him not want to hang out with me. It's not like just some random boy where the worst would be him saying 'no', the worst would be I lose one of my really good friends. What should I do?

–Best Friend Looking to be Girlfriend

This is a tricky situation. You really like this guy emotionally and want to start connecting with him on a sexual level. You're scared, though, that he'll react negatively and you'll lose that connection because he'll withdraw from you.

There's a line you haven't crossed with him yet, and you want to cross it. The best thing to do in this case is to tentatively dip your toe in the pool. You can start to talk about how everyone thinks you're dating, and see how he reacts. Ask him how he'd feel if you were dating. Bring it up a couple of times, and see what he thinks of the idea.

He could be thinking the exact same thing as you, but is also too scared to talk about it…although the more likely case is that he just isn't into you. Think about it: when you first met, what stopped you from dating then? Sure, you didn't have feelings for him. But if he had feelings for you why didn’t he show them? First impressions really do mean a lot, especially in a situation like this one.

You can keep asking yourself these questions, or you can actually find an answer to them. Finding the answer, however, is going to take a lot of courage on your part.

You said that the worst outcome in this situation would be losing a really good friend. Logically speaking, that isn't true because if he is a "good friend," your revealing of feelings won't ruin the relationship. The worst outcome is actually if you don't do anything, and always have that "what if" question in the back of your head. Twenty years from now, you don't want to be thinking about what could have been.

If I really like someone should I avoid having sex with them right away?  I know that this is the common advice girls get, but is it worth risking that he'll move on to someone else?

–Not Quite Ready Yet

It really depends on the person. Some guys will drop a girl who won't have sex with them right away, while others are willing to wait. The things you have to think about are what kind of guy you want, and what you mean by "right away."

If you're planning on waiting three weeks before doing anything with him, I'd say it's too much. But if you are thinking about waiting until after a couple dates, I'd say it's perfectly fine. If a guy can't wait a few dates for you to bring him back to your room, he probably isn't worth dating.

Also, there are lots of other things you can do before sex. When you find a guy you like, get him going a little. Whether that involves a little making out and groping, or some mutual oral sex…it's up to you. But you definitely want to do something, to show him even if you’re not ready for sex at the moment, you might be ready at some point in the future. A guy can hope.

Don't do anything you're not comfortable with. Most guys will wait, and some won't. Just remember that the ones who don't wait are probably not interested in a relationship anyway. You shouldn't have to modify your own actions from the norm when trying to attract a guy. The person you're going to date should be on the same level as you from the beginning in terms of the timing of sexual activity. As long as you're not planning to wait forever to have sex with him, you should be okay.

Anonymously ask Noah your own hookup/dating/sex/relationship question below and you may find your answer in next week's column.

Previous Post:In Case You Missed It: First Presidential Debate
Next Post:How to Get a Summer Internship NOW