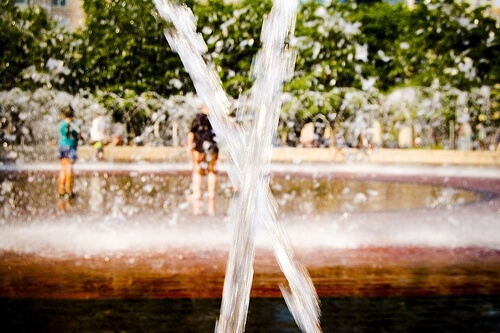 5 Cities that Beat the Heat

With temperatures soaring all over the country, it goes without saying that summertime is officially upon us. Some of you are sticking in your college towns and others are returning home for much needed R&R. If you are planning on staying in town as an out of towner, you’ll probably be faced with a strong urge to cool your feet, but you won’t know where to go. Here’s a list of a few watering holes in major cities located all over the country:

“I like two places,” says Brandon Malachi, senior at the Berklee College of Music, “and they’re actually quite close to one another. First, I like the Common for people watching.” Perhaps because of its close proximity to the shopping draw, Newbury Street, or because it’s just a nice park, Boston Common attracts all sorts of folks who come to cool off in the Frog Pond. “Then I like anywhere on the Esplanade, just to hang out by the river.”

“There’s a lot of great places in Seattle proper to cool off,” says Dana George, Hopkins alum, “but I’m a fan of getting out of the city. Stevens Pass Highwayor Route 2 follows the Wenatchee River. You can stop at any of the rest stops along the river and go swimming. The water is chilly, but can’t be beat on a hot summer day when you need to cool off.”

“It’s a swamp or swamp-like, so finding good fresh water swimming is tough,” explains Tulane alum Margaret Geary. “However, the Fly in Audubon Park is great if you want to be close to water.” In fact, right on the Mississippi, the Fly got its name for a butterfly-shaped, river-viewing building that was demolished in the 80s. These days the Fly is referred to as “The Riverview” by non-locals.

“I’m a fan of Zuma Beach,” says Rose Breslauer, a Johns Hopkins alum. “It’s not too touristy and is a pretty nice beach. It’s popular, but not relatively crowded.” However, if you aren’t a fan of the sand on the beach or people in your business, you could search out a pool. “There are a lot of pools in LA and you’re bound to find a local student who has one,” says Breslauer.

For those of you stuck in my neck of the woods, One of the beach towns is best reccomended. If you’re looking for beaching on the cheap, look into camping on Assateague Island. It’s only 20 dollars a night per person, and you won’t be forced to deal with unsavory tourons in the resort towns like Ocean City or Rehobeth Beach. Beware, though, the unofficial state bird of Assateague is the mosquito.