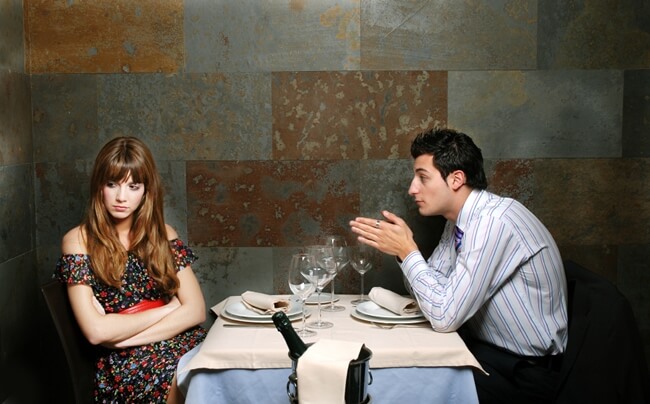 This just in: Parker just returned from one of the worst dates of her life. Sure, he was cute. He worked at my favorite restaurant, one I frequented approximately six times a week – what the hell was I thinking? Saturday night, I called the restaurant and asked to speak to Alex. When he came to the phone, I blurted out, “Would you want to go out sometime?” He excitedly answered yes, and I was pumped for our date. If only I knew… But hey, I preach the benefits of dating; going on a disaster date (sans camera and MTV programming) can be helpful when deciding whether someone is boyfriend material or not.

Warning Sign #1 – He talked over me the whole time.

Wow, was that a pain in the ass. Every once in a while, this guy would take a break from his life rantings and ask me something about myself. And then, seconds after I started to answer, he would suddenly turn the conversation back to himself.

“So how did you get started in journalism?” he asked.

“Well, when I was in high school, I wrote for the school paper –“ I would start.

“You know, when I lived in Japan, I wrote for their paper as an international correspondent…” he interrupted, and just like that, I was completely forgotten.

How irritating… I didn’t feel like I was on a date, I felt like I was at a autobiography reading. After all, the cooler you are as an individual, the less you have to talk about how cool you are; it should just come naturally.

But listening to Alex prattle on about himself made me realize how important it is to always be a good listener. There’s a technique expert psychologists recommend to indicate that you’re truly listening: make sure you’re concentrating on what your dinner date is saying, rephrase what they’ve just told you, and add an opinion or question at the end. When your date mentions that they studied law for 3 years before switching to medical school, reply, “Wow, three years of law school. I would never have the focus for that.  What made you decide to become a doctor instead?” This shows that you’re accurately listening to his stories and are actually interested in hearing more about it.

I think it’s a great idea to go on dates, especially because it serves as a screening process. Before sleeping with someone, see if they’re even worth your time. I’ve gone on dates with guys I was super excited to meet and hang out with, only to find that we had literally NOTHING to talk about. The more Alex droned on and on about his amazing boxing skills, or the four years he spent in Japan, the more I realized I couldn’t care less. We had nothing in common, and I didn’t want to see him again. Done. When you get stuck in the rut of hooking up, sometimes you missout on finding someone worthwhile. You think, “Well, I like kissing him, he’s cute, I only have to see him once a week,” and you become rooted in a bad habit. By going on a date, you can logically process what it might be like to be with someone for a longer period of time.

I hate this one. It used to be the old “arm around your shoulder” trick at the movies; now guys just reach in and kiss you, even when you’re not into.Physical chemistry is really important when on a date. While it’s usually not advisable to sleep with a guy on the first date, you should at least get some sort fluttering of butterflies in your stomach, some semblance of sparks when you’re together. If you’re cringing at the very thought of holding his hand, something is clearly off.

I’ve been in situations where the guy was awesome – smart, funny, and really cute – but there was no chemistry. Even a kiss on the cheek made me gag a little. When Alex kissed me before our movie date, I wanted to run to the bathroom and wipe my mouth off.  While it’s not the end of the world, feelings like this make it very clear that your date just isn’t for you. Whether this guy is trying to put the moves on you or respectably reaching your hand, if you’re not getting good vibes, he’s not for you; trust me, you’re better off acknowledging it and ending it.

I recently met a 22-year-old girl who has never gone on a date in her life – ever. She’s not a total recluse; she’s slept with plenty of guys, and while I don’t judge her for this, I feel like she’s missing out on an interesting experience. The formal process of sitting down and making conversation with the sincere interest in finding out more about someone else’s life – what makes them tick, what they’re passionate about– may be a bit outdated by today’s standards, but that doesn’t make it any less important.

Rather than jumping into bed with a guy you just met and cringing about it later, take the time to figure out if he’s actually worth doing the deed at all.While I can’t speculate as to this girl’s self-image, I CAN tell you that I leave most dates feeling more confident, happier, and prouder of who I am as an individual. A date is a tacit agreement that two people are genuinely interested in finding out something about each other. By figuring out what you want and need in a partner, you can move forward and have a clearer idea of who to date. If you ask me, a disastrous date may not always be so disastrous after all. Laugh at it, learn from it, and leave it behind you.

Previous Post:Why Do We Crowd Surf?
Next Post:A Day in the Life of University Police