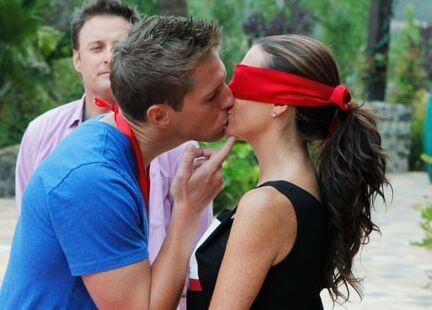 For those of you who have been watching season two of Bachelor Pad on ABC, you know the romance between Blake and Holly can be described as nothing short of scandalous. For non-Bachelor franchise fans, let’s catch you up on all the drama.

Bachelor Pad is a spin off of The Bachelor in which former Bachelor and Bachelorette contestants are put in a house together to compete for $250,000 and hopefully find love.

Here’s where things get sticky. Holly was previously engaged to Mike Stagliano, a fan favorite and Bachelorette contestant on Jillian’s season. Obviously ABC jumped on the opportunity to cast exes on this season of Bachelor Pad, putting both Mike and Holly together in the house.

It’s been clear to viewers throughout the season that the love street is one way. Mike openly has feelings for Holly still while Holly just is not having it anymore.

There’s always the fun time that comes around half way through any Bachelor season when viewers start to find out spoilers or updated information about contestants while they are still on the show. The time has finally come for season two of Bachelor Pad.

On September 8th, People Magazine tweeted “Bachelor Pad's Holly and Blake are engaged” with a link to their online story breaking the news. Though sudden, the news was not shocking to anyone who has seen the recent episodes of Bachelor Pad on which their romance began to boil.

On the August 29th episode, contestants were challenged to a kissing contests in which there would be one male and one female winner. The prize? A rose saving each winner from elimination and the chance for them to take any other contestant on a date.

Coming out victorious, Blake chose to take Holly on a date, giving them the opportunity to share their first intimate kiss to be viewed by millions of Americans. On the following episode, their romance continued to brew, much to Mike’s dismay, leading him to confess on television that he wanted to punch Blake in his “perfect dentist teeth.”

When Blake was voted off the show on Sept. 5, Holly handed him a note letting him know it wasn’t over between them. She wasn’t lying. The two are engaged now, leaving everyone to feel sorry for poor Mike.

It’s twice now that Mike has been snubbed by a girl on national television. Tune in to the season finale Monday night on ABC to see if Holly wins, bringing in a cool quarter of a million dollars to help pay for their wedding ceremony.

Previous Post:Breaking Away From Your “Type”
Next Post:Why does my vagina hurt after sex sometimes?