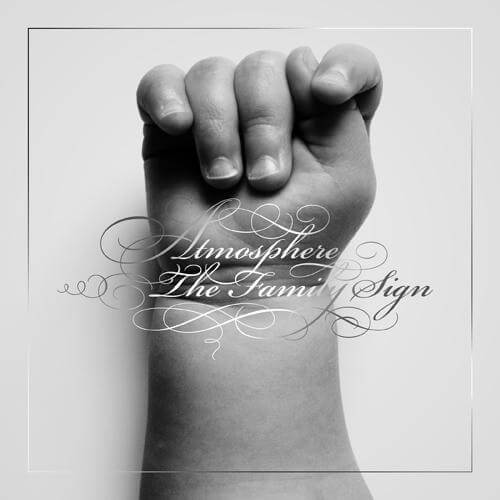 Atmosphere released their seventh studio album, The Family Sign, in early April and listeners were taken aback by the anguish that the raconteur, Slug, expels throughout the album.

The usual duo, Sean Daley (Slug) and Anthony Davis (Ant), collaborate with keyboardist Erick Anderson and guitarist Nate Collis in this dreary narrative that expresses Slug’s contemplation on getting older, domestic abuse, and dealing with loss. The Family Signis a departure in tone from their last album When Life Gives You Lemons, You Paint That Shit Gold, but still finds a way to capture the imagination of the listener.

“My Key” is the first of 14 songs in the album and introduces Slug’s narrative anecdotal style, and at 38 years old he has a compelling story to tell. He presents a collage of feelings chronicling his upbringing in Minnesota. The rest of the album specifies incidences of loss, abuse, and age throughout his lifetime.

The voice behind the artist Slug compels you to feel emotional over his story. The next song, “The Last to Say” is a self-admission of abuse that took place in his household as a child. His slow and elongated rhymes are accompanied by a soft and mellow piano rhythm makes his story extremely persuasive. He pleads to his mother, “Let me be the last to say, please don’t stay. Let me be the last to say, you won’t be okay.”

Slug is as much a poet as he is a rapper. His verse is long and reflective of his personal experience. He uses the dialogue from important conversations in his life, with lovers, friends and family members. He uses line breaks, unfinished lines and vague language to allow the listener to imagine it in association with their own experiences. This style puts the listener in the midst of Slug’s life and narrative.

The album’s finale, “My Notes” ties together the album with an optimistic feeling. It seems as though the sun finally comes out in this song and Slug realizes the hope that the future brings.