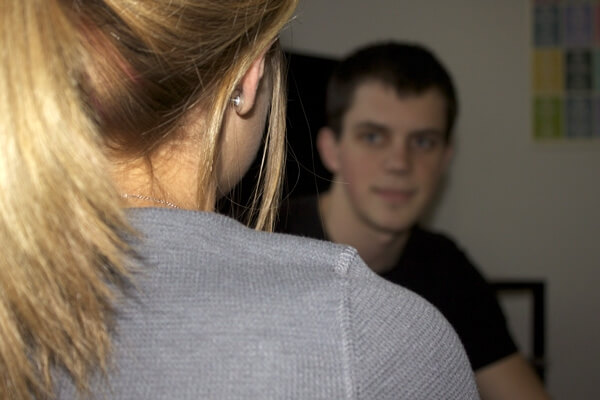 What are you supposed to do when you find yourself in that awkward phase where you’re dating someone you really like where you both hangout all the time, talk everyday, have met each other’s friends, are exclusively hooking up, and have everything that comes with the title… except the title? Instead of just enjoying your time with them, you spend it wondering and being completely confused.

To make matters worse, people start to ask, “So are you together? Are you not hooking up with other people anymore? Are you two official?”

What do you say? That it’s complicated? That you kind of have a boyfriend/girlfriend? You start to look at your empty relationship status on Facebook and see that you don’t fit into any of the categories listed. The uncertainty of not knowing is enough to send most people into crazy over drive. You begin analyzing every action, having long venting sessions with your friends, maybe even shedding some tears in fear of not being loved back.

It’s time to have “the talk” and ask that little, but very important, question. The question that can either mark the beginning of a beautiful relationship… or quickly kill a budding romance and send the other person running. “Are we official?” But what does that even mean?

“To me, exclusive means that you two have talked about it and defined it,” said Sarah Takimoto, a freshman at Stanford University. “If you haven’t then you aren’t exclusive.”

Without defining your relationship, things not only become more complicated between you two, but it can also get messy when it involves hooking up with other people. There’s that saying, if you’re not official, then it’s not cheating. Many students live by this rule. “If you haven’t talked about being exclusive, then anything goes,” said Takimoto.

You don’t have to wait an extremely long time before asking, but if things seem to be going in the right direction and deep down you know you two are more than just dating, then go a head and ask.

The best answer seems to be to talk it out. Just ask whomever you’re dating and define your relationship together. If you’ve established a pretty stable relationship with someone, then it’s okay to ask where you both stand.

If you’re still unsure, it doesn’t hurt to wait a little bit to see where things will take you. But if you’re holding out because of fear, it might be a sign that the person you’re with isn’t someone who is ready to be in a serious relationship. “If you are too afraid to ask because you think you would scare the other person off then that means you are in an open relationship without commitments anyway,” said Takimoto.

A label isn’t just a label. It’s a sense of security that you’re with someone who cares for you and sees you more than just some booty-call. It’s a declaration of both your feelings for one another, and at the end of the day, that’s all anyone wants from a relationship.

Previous Post:Focus: The Great Adderall Shortage
Next Post:CM’s Most Anticipated Albums of 2012