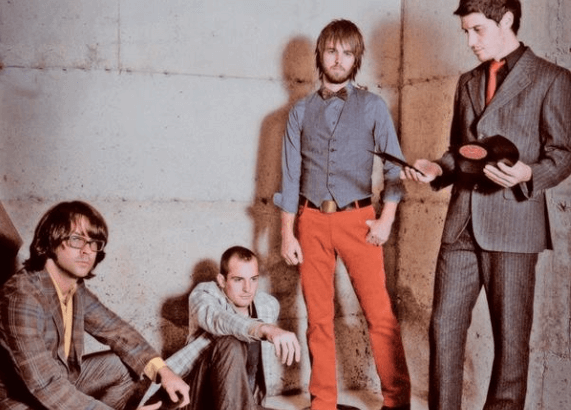 Anything But Typical: CM Talks with Mutemath Drummer Darren King

“Some of the best shows I’ve ever played are shows where I no longer have any clean clothes.”

That’s coming from Darren King, drummer for the New Orleans-based rock outfit Mutemath. In those instances, King says, he’s left with no choice but to reach into his trash bag of clothes and pull out his “wet, filthy, nasty clothes from the previous show that have been festering overnight.” But donning those wet, nasty clothes is far from King’s kryptonite. Instead, they have an enabling effect, making him feel like he’s in the middle of a show, almost as if the adrenaline is already flowing.

Besides, “doing laundry on the road is a task,” says King. “It takes all of your focus and dedication to find [a] washing machine in the city.”
The seeming “stankiness” of King’s clothing situation isn’t exactly a bad thing. If laundry is music, then for three years Mutemath has been passing by washing machines and running on adrenaline as they’ve toured extensively in support of their critically-acclaimed, self-titled debut album. After receiving a Grammy nomination and an impressive accolade from music magazine Alternative Press (“the #1 band you need to see live before you die”), the alt-rock quartet took a brief hiatus from touring to record Armistice, their second full-length album (released in August 2009).

Back on the road again in 2009 into 2010, this time in support of their sophomore effort, Mutemath is set to be on tour through the end of May. College Magazine had the chance to catch up with drummer King while the band was in Boston.

How’s your latest tour been treating you guys? Any highlights?

One of the best of this year was Coachella. We had about 5,000 people in our tent watching us. It was so hot, and I was sick…But the reward was afterwards I got to see Phoenix. Thom Yorke and his band sounded great. And the Gorillaz also sounded amazing. So I felt after going to that festival that music’s not hurting as bad as I thought it was. It’s a pretty good time to be alive for live music in particular. Coachella was tiring, but it was a shot in the arm at the same time.

Do you guys enjoy playing big festivals like that over shows at smaller venues?

Absolutely. Love playing festivals. To be honest, [festivals are] just about the only time I get to go to a concert other than the ones we play. Plus backstage, I get to spy on my heroes too. I get to watch them walk around backstage.

Is there a type of musician camaraderie there? For instance, when you’re at Coachella, do you get together with other musicians and just hang out or jam together?

Well, sadly, what with all of the work and effort that comes along with traveling, playing music is, I guess, the thing we do the least sometimes on the road. There’s a lot of setting up and maintenance and keeping our heads above water. So whenever I get together with friends it’s always just to sit down and eat, and catch up. But I do have a lot of friends that I only get to see when I’m on tour.

Your guys’ band name, Mutemath, has an interesting story behind it.

It’s boring, but it was legal. The name ‘Math’ was taken. The name ‘Mutemath’ was actually taken. We had to buy that from this electronic duo in Louisville that had already started a band by the name of ‘Mutemath’ and had a website. But they were willing to sell the name to us…I don’t think they were taking it very seriously anyway—kind of a hobby for them. We just had to come up with a name we wouldn’t get sued for.

Over time as you guys have played and grown as a band, has some sort of meaning behind the name developed?

It really is just a way to tell us apart from all the other bands. It’s for sake of categorization and promotion to have a name. I guess that’s a funny thing about human names, too. We say that our names have all these meanings, but really a name is whatever a person is. They create the meaning for it, whether it’s a good thing or not. There are a lot of bands that I think have really lame names, and they’re such a good band that I think it makes their name good. One of them I think would be The Beatles.

How did your band’s sound come together?

When the band started out, it was me trying to impress Paul [Paul Meany, the band’s vocalist] that I could create music on my own just like he did. He’s older than me and far more capable. But I started getting records and CDs from the library, and I would sample them make these little tracks and I would mail them to Paul. He would sing on them and send them back to me. (I was in Nashville, he was in New Orleans.) So we got into a habit of collaborating long distance. And for a while as a band, we still do [sic] that, even if we lived in the same house. I would work in one room until I had something, and then I’d pass it on, and I would work on something else. And it wasn’t until this most recent album, until Armistice, that we would go fully into working together that way. Though it still went through a lot of different breakdown processes, some I think to the benefit of the song and sometimes to its detriment. But most of the time I’m proud of how it all came about even though the process was arduous.

Do you guys have a favorite song on that album?

One song I was surprised about was ‘Spotlight.’ When we made that song I was proud of it, but I didn’t know if that would go over well live. But that’s become a really fun one to play live. And on the recording, just for the album, I’m always happy about how the more introspective songs come across. ‘Pins And Needles,’ that’s probably my favorite one on the album.

When you guys brought in Dennis Herring, your producer on Armisitce, what did he bring to you guys or add to the album?

He kept us from settling at times when I think we would’ve been willing to settle for something. There’s always a default thing that you’ll do. A default beat or a default melodic style. And he pushed us to try things that we weren’t sure if they were going to be good or not. And half those things we tried were not good and half those things were great, and that was exciting to be stretched in that way.

Your music video for ‘Typical’ is in reverse. Did you guys have to learn to play the song backwards?

Yeah, it was confusing…a headache to say the least. The most impressive part was Paul not only learning the words to the song backwards, but also the melody [backwards]. We were on tour with The Fray, and he just used his spare time to learn the melody backwards. It just sounds hilarious. It sounded like a German accent singing a really weird sort of Eastern European scale. It was perturbing.

Something I find interesting is how your song ‘Typical’ typifies Mutemath’s rather atypical sound.

The goal is to find things in music that seem to be universally good, but to do something different with them so that it doesn’t sound like what we’ve all heard before. It’s certainly not music for the sake of alienating people and it’s also not, hopefully, just an attempt solely to get popular. So it’s trying to strike a balance between kind of immediately interesting but also immediately pleasing. And there are bands like that that I like, but what I’ve seen is that it takes a little more time for them to get popular, for them to find a niche.
FacebookTweet
Celebrity Advice Life Music Festivals Party