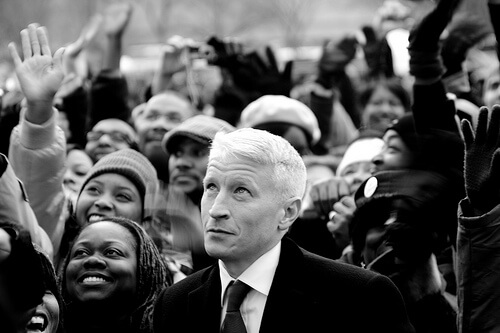 Anderson Cooper: Out of the Closet

Anderson Cooper has officially announced he is a proud gay man. It seems as if it was some sort of unsaid truth that despite everyone always asking, Cooper remained extremely private about. His personal life and sexual orientation were left up to speculation and “is he or isn’t he?” gossip.

In a letter written to Andrew Sullivan, a friend of Cooper’s, he said he felt, “…there is a value in standing up and being counted. I’m not an activist, but I am a human being and I don’t give that up by being a journalist.” Cooper went on to say that he has always been very honest about his lifestyle to his friends, family and colleagues.

Cooper’s reluctance to discuss his personal life stemmed from his journalistic integrity, not fear of coming out. Cooper always believed that the best way to tell the stories of others was for them to know as little about his as possible. He wasn’t trying to hide his homosexuality, but rather trying to remain as “fair and honest” as possible.

To the gay community this is a major gain. “We come in all walks of life and we are in every field you can imagine,” said Maggie Garrido, 50. Garrido has been in the LGBT lifestyle all her life and has spent the last 16 years in a relationship with a woman.

She is also my mother.

My mother has not had an easy road. Although her friends were very accepting of her lifestyle, she struggled to come out to her family, especially her mother. My grandmother is a very old-fashioned, religious woman and although she accepts it now, I remember as a child facing the harsh truth that my step-mother was not welcomed by my grandmother. I sometimes struggled with it as well. I called my step-mother my aunt so I wouldn’t be made fun of at school or treated differently by people who didn’t approve. It was confusing then but I am extremely proud of them now.

Yance Vargas, a recent graduate of John Jay College of Criminal Justice, said, “It’s funny because I was just counseling a girl today about this very subject. She was upset because she was being gay bashed and one thing she said was that its embarrassing because something negative is always being said about gay people.” When asked what advice he gave her he said that she couldn’t “live in fear and life has always been defined by those willing to defy the thoughts and obstacles that prevents other’s progression.”

If only Tyler Clementi, a student at Rutgers who killed himself after being taped by his roommate during an intimate moment with another man, was around to see he’s not alone. No matter how proud one is of who they are, there are always going to be obstacles. The trick is to find those who inspire us just like Anderson Cooper. Cooper is just one person, but Christine Quinn, Ellen DeGeneres and Jim Parsons can all lend voices to those who struggle with acceptance in society.

But there needs to be more that people can do, right? Well there is! How do we understand something about anything in the world? Education, right? If everyone could learn the value of love in any capacity, maybe one day we'll reach a point where a public figure's sexual orientation won't be breaking news.

But thank you, Anderson Cooper. You've stood up. You've been counted. Now we can only hope that as a society, we work toward building tolerance and understanding of the LGBT community. Maybe then we would see less hate crimes and more rainbow flags.

Previous Post:Madea’s Witness Protection: Danielle Campbell Talks About Her Dream Role
Next Post:Who Says You Canâ€™t Go Home (But do you really want to?)