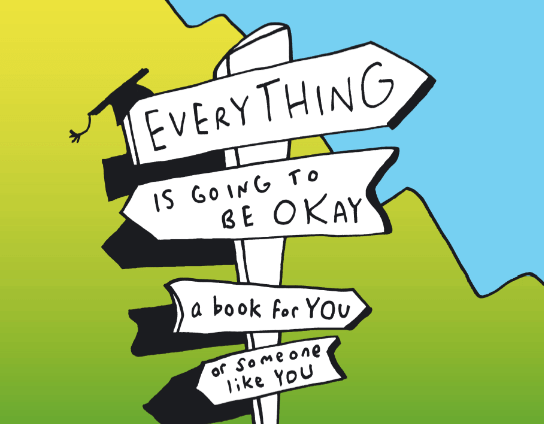 Kaplan is a cartoonist for the New Yorker, has written for Seinfeldand Six Feet Underand has written illustrated novels, his “babies,” showcasing the lives of Edmund and Rosemary, a relatable, contemporary Brooklyn couple.

In this novel, Everything Is Going To Be Okay, Edmund delivers an impromptu graduation speech that – outrageously – lasts for over a week. In fact, Edmund spends an entire day discussing ham and cheese sandwiches, and another portion telling the story of the movie Tootsie.

Rosemary finally stops Edmund from speaking by making a sign that says “Everything is going to be okay,” a way to end his speech and provide change and closure for the graduates.

Kaplan got his start in Los Angeles in his 20s, trying to make his way as an independent writer, but at his day job he found assisting other writers in creativity to be a draining experience. However, he always came home at night and would write – and doodle.

Although Kaplan did not attend art school, he started submitting some of his “doodles” as cartoons to the New Yorker, a magazine that features cartoons. After years upon years of submissions, they finally bought one.

Kaplan believed that illustrations and text have a symbiotic relationship, each offering an alternative vision of vividness to the world.

“When you have illustrations with text, it’s guiding you in a way that doesn’t happen when you just have text,” he said.

Kaplan also learned through his life that it is okay to have contradicting feelings about what lies ahead, and he hopes that the message of the book transcends not just to college students and/or graduates, but anyone.

“I feel like we’re all everything,” he said. “I feel like I’m an optimist just as much as I am a pessimist, even though it may not always seem that way.”

Regarding Everything Is Going To Be Okay, Kaplan added that he does not see himself necessarily as the person speaking in front of all the graduates, parents and friends.

“I definitely identify more as a person watching,” he said. “What I do identify with is coming up with something to say. As a writer and a cartoonist, it is mortifying.”

He noted that he suffers from writer’s block, just like college students everywhere today, but that it stems from his frustrations of composing a work he feels strongly about.

“I have the pain of writer’s block,” Kaplan said. “I finally re-write it to a place I’m happy with. With these little books, I start with a place of misery and pain and hiding under my desk and working myself into a frenzy.”

Kaplan later added, “Everything takes longer than I want. Once I’m in the middle of it, it’s pleasurable, but at the same time, it ends too soon. It’s like everything I do, was slow at the beginning, found my way, and once I let the book take over, I’m on my way.”

Kaplan is currently producing a new show on HBO, Girls, which explores the post-graduate lives of fresh college alums. He has been working on this since February.

Although his creative talents have sometimes taken him away from the pencil and paper, he finds innovation the most rewarding trait.

“By myself, alone, coming up with whatever it is, a cartoon, a script or book, I’d say that’s the most rewarding, just sort of being alone in my head and coming out on the page.”

Previous Post:No Change for the NFL
Next Post:7 New 2011-2012 TV Shows Worth Waiting For