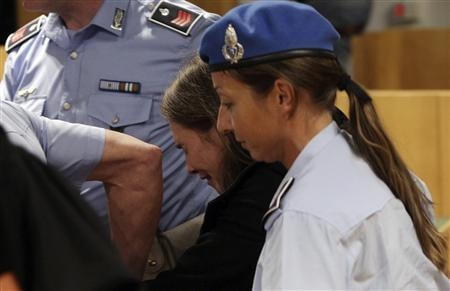 After a 4-Year Study Abroad Amanda Knox is U.S. Bound

For many college students, studying abroad for a semester or summer is one of the highlights of college. We look forward to those four months with bated breath, anticipating memories and trips that will soon be irreplaceable and impossible to reproduce. Unfortunately, four years ago, one 20-year-old American college student embarked on a study abroad that just ended today, but for reasons the rest of us cannot fathom.

Late this afternoon, 24-year-old Amanda Knox was acquitted of the murder charges that landed her in an Italian jail four years ago, when her English roommate was found raped and murdered in their apartment. Knox and her boyfriend at the time, were charged with killing Meredith Kurcher. After a long process of appeals in a judicial system far from the likes of the regulated process we know here in the States, Knox will be able to return home to Seattle, Washington and move on with her life.

Unfortunately for Knox, being in a different country with a different legal system made this battle all the more difficult. Before we study abroad, many of us are warned to pay attention to the foreign laws and processes that vary so drastically from those that we are used to because one, unknowingly, wrong move, could land you arrested or even worse, in jail.

Whether or not Knox was actually guilty of her crime is, for a moment, beside the point. It is important for you underclassmen to realize the repercussions that your actions will have. We have grown up accustomed to American law and society, but while being in a different country is thrilling and adventurous and filled with new experiences, there is nothing exhilarating about a trip to an Italian jail or a murder charge.