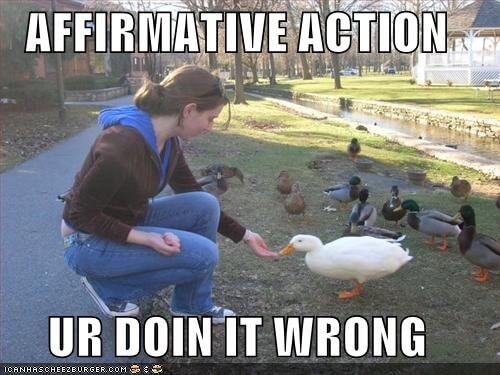 Back in 2003, the Supreme Court upheld affirmative action after looking at a court case involving the University of Michigan’s point policy, stating that in 25 years AA will “no longer be necessary.” (Insert quip about confusing the two AA's here.) What would they have said just five years later, after the 2008 election–you know, after the election of Barack Hussein Obama? Now eight years after that initial Michigan affirmative action case, the Supreme Court is being forced to reevaluate the policy thanks to Fisher vs. The University of Texas Austin, the modern day Brown vs. Board of Education – but this time the roles are reversed.

The case in itself is ludicrous, and I’m not talking about the rapper. Abigail Fisher, the plaintiff, was rejected from the University of Texas Austin because she wasn’t in the top 10 percent of her class is white. At least, that’s what she argues. The fact of the matter is that she simply wasn’t up to the university’s standards. If they say they’re only accepting the top 10 percent of the graduating class, they’re only accepting the top 10 percent – although I’m sure there are a few exceptions. Thanks to affirmative action, there were probably a handful of other students who were accepted outside of the top 10 percent, such as minorities or students who were going through rough circumstances while attending high school. Because, you know, it's hard to do your best in school if you're looking after your sick mother or if you were in a month-long coma. Affirmative action doesn’t work the other way around; white students don’t get points deducted simply for being white.

When the Supereme Court looks at the case come September, universities and minority students may very well have to look elsewhere for an academic crutch with affirmative action out of the picture, if it comes to that. As it stands, universities have affirmative action so they can have a "diverse student body." Surely there are other, less biased ways of creating a mixed culture on campus.

Sure, a few decades ago affirmative action may have been viewed as a necessity. After all, the world really screwed the pooch with slavery–boy, did mankind get that one wrong. But since slavery came to an end, the vast majority of Earthlings have attempted to make up for previous mistakes by viewing everyone of all colors, shapes and sizes as equal.

America, especially, prides itself on being a nation built on equality, albeit “separate but equal” for a decent chunk of its post-Civil War history. But is it fair to continue inflating the GPAs and test scores of minority students so they can get into better colleges? Some of the greatest minds of our time, some of the greatest athletes of our time, even some of the greatest speakers of our time – the latter of which includes our current president and a man who warranted a federal holiday every January (if you can't figure out who, here's a hint: there's no 'I' in MiLK)– are minorities or have minority heritage. Hell, the new Spider-man, Miles Morales, is half African-American, half Latino. And yet, when admissions offices around the country review applications, there remains a handicap of sorts towards prospective minority students?

W.T. Woodson graduate Chris Byer, who describes himself as "a student from mixed ethnic background," said he is "firmly against affirmative action."

"I believe it's basically reverse-racism; feel pity for the minorities, so give them benefits to make up for racial discrimination in the past. If colleges are going to give out scholarships and promote equal opportunity, then truly make the opportunity for scholarships equal and solely base it on intellectual tests like essays, grades, math scores…just not race," he says.

Now I myself am not for affirmative action…but I’m not exactly against it either. After all, I did take a literal interpretation of “African-American” when I applied to colleges. Having Egyptian heritage but being born in Rhode Island, I am technically both African and American. Do I think it’s unfair that I got away with that? That’s beside the point.

I do think we still need affirmative action but I also think that we need to reevaluate exactly how we’re applying it. As the NPR article (linked earlier) points out, race doesn’t necessarily equate to class. Take a look at Carlton Banks from The Fresh Prince of Bel-Air. Excluding the fact that Carlton is the whitest black person anyone will ever meet, he comes from a very, very rich household. Just because an applicant or their family came from Ghana doesn’t mean their application should be looked at the same way one would look at the application of someone growing up in the slums.

Universities should start looking at what resources were available to what students, taking into account where they grew up, their family’s income, the whole nine yards–everything but skin color. The same goes for scholarships. They should be based solely on academia. If a non-minority student needs a scholarship to attend college, it would be unfair for Carlton to hog them all up because he's equally smart but has darker skin. Offering the benefit of the doubt to a student simply because he or she has darker skin is, essentially, judging a book by its cover. For all anyone knows, that book could have a trick cover and inside are the solutions to Einstein’s most complicated theorems. Ever see Good Will Hunting?

If we keep up the affirmative action policy, it’s just a matter of time before prospective college students start pulling a reverse-Michael Jackson or a Kirk Lazarus (Robert Downey Jr.’s Oscar nominated role in Tropic Thunder) to get into their dream schools. How would universities like them apples?

Previous Post:When are girls most sexually driven?
Next Post:We Need a Break