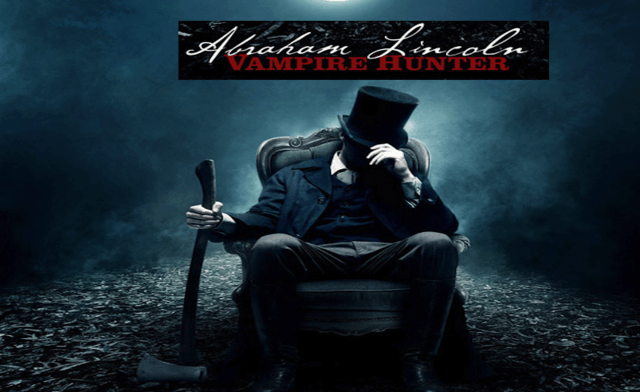 Missa SangiminoMar 16, 2012
Home » Latest Posts » Abraham Lincolnâ¦. Vampire Hunter?
FacebookTweet
When I heard of the release of this new movie, I couldn’t believe my ears. Abraham Lincoln: Vampire Hunter—what a title. Although my love for co-producer Tim Burton is pretty extensive, I gotta say, this time I think he’s gone a little too far.
The movie doesn't originate from the famed movie-maker's mind, it's based off the 2010 book of the same title, written by Seth Grahame-Smith (Who also penned the script), and was picked up by Burton and co-producer/director Timur Bekmambetov.
With such an odd title, Abraham Lincoln: Vampire Hunter may normally call for the high expectations achieved by Burton’s other peculiar successes—except that, this time, the title is not unique at all. In fact, it is nothing more than the small suggestion of a mainstream media trend that seems to be captivating audiences nationwide.

Vampires have become a sensation in television since popularity for the Twilight series skyrocketed. Beautiful people, evil magic and romantic, do-or-die lovin’: everything vampires bring to entertainment, and everything a show needs to be popular with the teenagers.
They have become almost sickeningly prevalent in new TV shows and movies—from True Blood to The Vampire Diaries, from The Night Projectionist to Blood Type—and frankly they are all starting to look the same. Despite my respect for Burton’s past achievements, please excuse me if I do not hold my breath for some more addictively dark, quixotically verbose vampire cinema.
The whole value behind Corpse Bride, Edward Scissorhands, Beetlejuice, Alice and Wonderland, Ed Wood, and Burton’s other productions is the fact that they are inimitable and take viewers to places that they could not imagine on their own. They move outside the bounds of normal television and bring something cosmic to the screen.
More importantly, they incorporate classic dark playwriting or are completely original—Burton’s films are not known for their adherence to trends or their knack of playing to popular modern themes. Considering all of this, the fact that Burton has chosen to be part of such an obvious TV craze.
So, the news is disappointing. Yet another great filmmaker has fallen to the masses. Throwing his money into a project based off a trend that mostly appeals to teenage girls. Still, I may have to give him the benefit of the doubt and go see the movie. Who knows? Maybe he’ll bring some new, blood-sucking insight into my cinematic life and I will finally see the reasoning behind the recent small-screen, vampire idiocy.
FacebookTweet
Life

Previous Post:How Condoms Are Made
Next Post:Top 5 Underused Sports Phrases