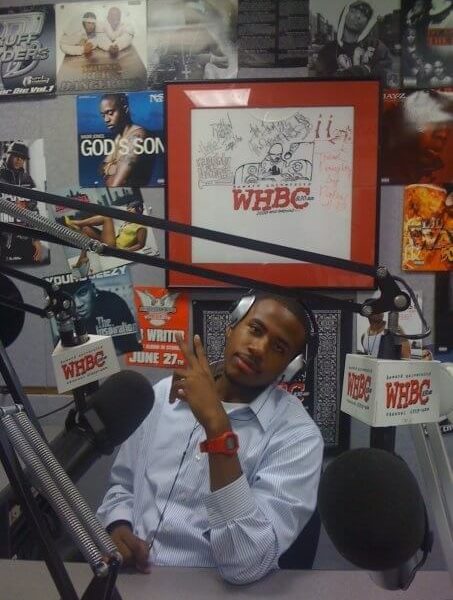 California native and up-and-coming artist Ta'Darrell Randolph, also known as, T-Ran, brings soul back to Hip-Hop through lyrics he describes as 'raw expression.' As the recipient of a full academic scholarship, T-Ran hauled across the country to attend Howard University in hopes to develop his candid lyrical tongue and expand his game-changing musical artistry.

He said, “[Mr. Navies] was telling me ‘Howard is the black Harvard and better… it is ours.’ From that point on I wanted to be at the ‘black Harvard’ because in America [Harvard] was the pinnacle of education.”

This spring, T-Ran will graduate with a B.A. in Radio Television and Film from the John H. Johnson School of Communications, and attributes his successes to Mr. Navies and his active participation with campus organizations.

As an on-air personality for the college radio station WHBC his freshman year, T-Ran interviewed and networked among artists like J.Cole.

“It was a place where I was able to see myself being in their position,” he said. “I was actually seeing these artists that we see in these big magazines. It helped me mold myself as an artist and visionary for I wanted to do.”

T-Ran has also been an executive board member on the Howard Transfer Student Association and has volunteered on the homecoming staff, Rhythm – all while maintaining a 3.5 GPA.

“I have to maximize my potential in every aspect of my education and goal,” he said. “I can’t take anything for granted.”

Of all his experiences, one of his fondest moments was his eye-catching performance at Howard homecoming amidst artists like Rick Ross – the threshold of his musical career on the East coast as the Oakland lyricist.

Following, T-Ran pushed out his sophomore mixtape The Wonderful Experiment (a tribute to 9th Wonder) on Sept. 9 and most recently, Outside The Box: Still Dreaming – both of which display his passion to inspire global change through lyrics.

“Outside The Box: Still Dreaming was more of me maturing as a man and telling these stories in a more articulate fashion,” he said.

With four projects and counting, T-Ran is patiently awaiting the release of his forthcoming album Heart & Soul in 2012 where he will reveal his most sacred thoughts and emotions about love, culture and strength.

He said, “I don’t want to give [my fans] a quick fix, I want them addicted to my music.”