The most difficult feat in college basketball is to defeat a rival on the road. The crowds are ruthless, the energyis electric; even the No. 1-ranked squad can lose its cool in a hostile atmosphere. With that being said, we're in the heart of the college hoops season, and these teams defend their home court the best.

If you look at sheer wins and losses, there may not be a tougher place to play than the Smith Spectrum. The Aggies consistently win over 90 percent of their home games even though they have not been a dominant force in college basketball for a long time. The Spectrum may not have the capacity that some of the newer venues do, but there is something to be said about the dominance the Aggies have endured in their own building.

The Lobos play their home games at University Arena, but you will rarely hear the 17,000-person area called anything but “The Pit” – and the name says it all. New Mexico has played over 800 games in their home arena and they win over 80 percent of them. But the real reason why The Pit is so hard to play in is the volume. The structure lends itself to intense volume throughout the game, and the Lobos take advantage of their raucous crowd.

While the Tigers are known more as a traditional football powerhouse, Littlejohn Coliseum boasts one of the best home-court advantages in the country.. Clemson has always played tough at home, whether it is against a non-conference opponent or in-conference powers Duke or North Carolina. EA Sports even ranked Littlejohn second on their “Toughest Places” list.

Although they are not playing in the Pauley Pavillion right now due to renovations, UCLA’s home court has consistently been one of the hardest places for opposing teams to come out with a “W.” Maybe it is because UCLA is one of the better basketball programs of all time, but the crowd at Pauley sure helps the cause. When you have as many championship banners hanging from the rafters as the Bruins have, you deserve to make this list.

The Carrier Dome’s nickname is “The Loud House,” and it got that moniker for a reason – it is LOUD. Because it doubles as the Orange’s football stadium, the Carrier Dome is far and away the biggest home court in college basketball at a capacity of around 35,000 (it holds closer to 50,000 for 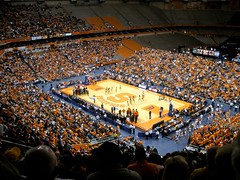 football). But Syracuse also has a reputation for having a very passionate and loyal fan base. The basketball program has been so successful in recent years, and part of that has to come from the fact that opposing teams can barely hear themselves think when they are on the court in “The Dome.”

Part of what makes a home court great is the tradition and history of the building itself, and the Jayhawks’ Allen Fieldhouse may be the most historical building of all. In fact, the court is named after James Naismith, the inventor of the sport. Allen holds a respectable 16,000, but its greatest strength is not in numbers. It is in two words: “Rock Chalk!”

From its distinctive interior to the sea of red that fills it, Assembly Hall on the campus of Indiana University screams home-court advantage. The once-great program faltered a bit in the mid 2000s, but it seems as if the Hoosiers are now surging back up to the top of the sport. Still, Assembly Hall has remained a daunting place for opposing Big Ten teams to conquer, and it looks as if it will remain that way for years to come.

Cameron Indoor Stadium is one of the more intimate venues on the list (about 9,000 spectators), and they make the most out of the limited people they can fit in. Duke’s student section, “The Cameron Crazies,” is one of the more infamous crowds in the country — and they sure can scream. The decibel levels in Cameron can reach that of a stadium twice its size, not to mention the Blue Devils have won around 90 percent of their games in Cameron.

The Peterson Events Center is one of the newer and nicer arenas in the country, and while that is all good and nice, the real reason “The Pete” is so hard to play in is the student section, The Oakland Zoo. Clad in all gold, the Pitt students have gained a reputation for being some of the loudest and wildest in the country. The Panthers have only lost four non-conference home games since they moved into their new arena.

The Dean E. Smith Center, better known as the “Dean Dome,” is the perfect storm of size and strength. For a basketball-only stadium to be able to fit more than 20,000 is pretty rare, but the passion of those 20,000 -plus fans is what makes the Dean Dome so hard to play in. The Tar Heels win well over 80 percent of their home games in a tough Atlantic Coast Conference, not to mention they usually schedule more difficult foes during the non-conference season. The Carolina blue throughout the Dome has become an iconic color for the university. It truly is the hardest place to play in all of college basketball.

5 Affordable Dates to Get You Laid
Next Post: Oh, Cliffhanger! American Idol Contestant Falls Off Stage