You are here: Home / Life / The Grindr Date I Never Saw Coming
Guys, I have a confession: I use Grindr. It’s a mobile app where gay men can scope the gayborhood (gay neighborhood), chat, share photos and do as they please. While online dating is as natural as Googling your suitor in 21st-century courtship, Grindr still bears stigma. Yes, casual sex is par for the course, but so are friends and dates. It’s the closest thing we’ve gotten to a real gaydar (gay radar), but I’ve found this gaydar can be hacked.
“Hey there,” said a man screen-named the “TheNakedArtist.” I have a rule of ignoring Grindr users whose photos are of headless torsos, but it was a damn fine headless torso. Once he showed his handsome face, I permitted conversation.
He was a graphic designer by day, aspiring artist by night. Between messages about Impressionism and films, he’d interject with variations on the theme, “I’d really like to sketch you some time.” A self-deprecating person by nature, I’d thank him then deny his opinion. But he was sweet. “Really, you’re a beautiful guy,” he insisted. “I’d love to draw you.”
By midnight, he invited me to his apartment for wine and a chat. I habitually say no to clandestine rendezvous past 10 p.m., but he was a tempting two-minute walk from my building. Sensing my hesitation, he said, “Don’t worry. We’re not sleeping together.”
On the walk over, I wasn’t nervous at all. By all means, I could’ve been marching towards death or any number of gruesome scenarios. But he lived in the same apartment complex and the similar elevators and hallways comforted me. Still, while midnight meet-ups are expected on Grindr, the amount of caution I hurled to the wind was not something everyone should do at home.
Two minutes later, I knocked on his door. He answered and was indeed the (nearly) naked artist. At the door stood a six-foot-two gorgeous hunk of man in boxers with a warm smile. Come on in, he said, and I entered the living room-cum-art studio, where sculptures, paintings and sketches of beautiful men lined the walls. But the most beautiful of all figures in the room approached me and handed me a glass of chardonnay.
As we continued our online chat in reality, I grew even more comfortable. He was funny and charismatic and the fact he was nearly naked certainly stirred something in me. I didn’t sense the attraction from his end but it didn’t matter; I was having too much fun.
After a Monet/money pun, he brought out his sketching tools. “Okay, you ready?”
“Ready?” I repeated. “I thought we weren’t sleeping together.”
“We’re not,” he said. “Even if we did, it’d be more fun for you than me.”
Though the naked artist appeared on Grindr, my innate gaydar wasn’t beeping. “Are you straight?”
He held up his sketchbook in defense. “Guilty.”
Like a good businessman, the naked artist used his masculine wiles and sculpted torso (he’s really hot, you guys) to invite men into his studio to draw them. He’d only get ten minutes at most in art class, so he tapped a veritable stable of anatomically ideal models on Grindr to willingly pose for him. As a straight man, sex wasn’t part of the equation. The only compensation would be the company, eye candy and a confidence boost.
He gave me the option of leaving but I had to throw self-deprecation out the window. Yes, the wine could have been roofied and yes, I was foolhardy, but when a gorgeous straight man thinks you’re “beautiful,” you take off your clothes and let him draw you in several poses as you drink your vintage white. It was one of the oddest dates of my life but one of the best. As I posed for him, the conversation flowed between politics and philosophy, which is more than I can say for some of my Grindr coffee dates.

By the end, he had several sketches of me and gave me one as a souvenir. I got dressed and he tacked the drawings onto the walls. We finished the bottle and said goodnight. On my two-minute walk home, I could only laugh. It felt like a hallucination, but real or otherwise, the night left me thrilled to be alive. Really, I was just relieved to be on the walls as a sketch than as a head.
Once I was home, the naked artist messaged me on Grindr.“Thanks for the company and the sketch!”
“No,” I said, “thank you.”
I’d never do it again, not without a security detail, but it was certainly a pleasant evening. Hung on his studio walls were the most beautiful men in the gayborhood and that night, I became one of them.
Photo at Huffingtonpost.com
FacebookTweet 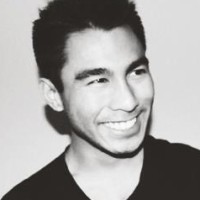