Study Abroad: A Test of Love

As the fall semester comes to an end, college students move out and prepare to spend their next semester abroad. Winter break for these students is a time to gather last minute necessities, make sure your passport is sorted, confirm your flight and say your goodbyes to family, friends and your sweetheart. Your family and friends will be waiting for your arrival back home with open arms, excited to hear about all your overseas adventures. But a study abroad program can be the ultimate test of love for a relationship and your boyfriend or girlfriend may not be waiting for your return so patiently. Five months away and the freedom of being in a new city is the perfect recipe for a potential dating disaster.

For this anonymous sophomore at University of Virginia, studying abroad meant ending her relationship.“I only studied abroad for the summer but it was still too long away from my boyfriend. I craved some kind of sexual activity way too much and I ended up sleeping with other people several times.”

If not their entire relationship, other students also sacrificed something while studying abroad, Alex C., a senior at University of Michigan, travelled to France for a semester. She successfully stayed loyal for the majority of the trip, up until the last week.

“I just got really upset that I was leaving soon. It was almost a semester since I’ve seen my boyfriend and I missed the intimacy,” she said. “I told my boyfriend that I cheated and we’re still together, but it’s not the same. The trust is still gone and I’ve been trying to get it back for a year.”

But studying abroad does not need to be the end of a relationship.

“Being in a long distance relationship and then going even more long distance seemed like death at first, but I realized I needed my own adventure to share with him and it was just that. It took a lot of understanding … but it was worth it,” said Gentry Brown, a junior at New York University. “He visited and we got to catch up on everything we had missed." 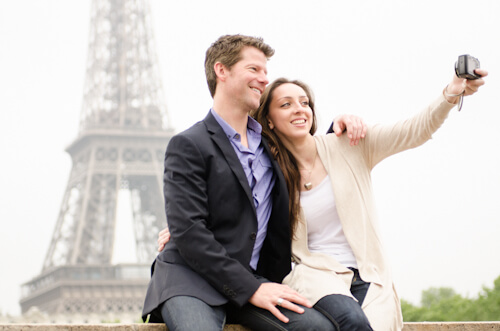 For some, staying together while studying abroad is possible with some communication and trust. However, taking a break for a semester is an option if you want to avoid jealousy, paranoia and restriction.

“When I went abroad, I knew it would just hurt my relationship because we’d always be fighting and missing each other. I also wanted to have freedom, so we decided to take a break,” said an anonymous sophomore from Case Western University. “We got back together once I came home and picked up back where we left off.”

Spending time apart while travelling can strengthen your relationship when you return and allow you an opportunity to explore. Couples may also have the option of studying abroad together. Even if you can’t get into the same study abroad program or you go to different schools, you could both study abroad in places close enough to each other to visit. For example, it is easy and inexpensive to travel between European countries.

It will be hard to leave your partner if you’re in a relationship, but travelling and experiencing new things and new places can change your life. “Study abroad is a time for self-exploration and if your partner doesn’t understand, then [he or she] isn’t worth it,” said Brown.