Plenty of Freshman Fish in the Sea: Dating Outside Your Grade

I’m a senior and, yes, my boyfriend is a freshman. No, it isn’t weird at all, obligatory jokes aside.

“Where are you taking him for Valentine’s Day? Chuck E. Cheese’s?”

“Do his parents know he is up so late?”

Why exactly is dating a freshman such an odd thing? If you are the older half of the pair, it makes sense to be a little apprehensive when it comes to maturity. Every upperclassman can look back to their early college years and find moments to shake their heads at. But if the maturity is there, does it really matter if they were in high school less than a year ago?

“It’s about chemistry and sharing a feeling that’s too hard to ignore. Age is just a number, some people never grow up,” said St. Philip’s College sophomore Jackie Smelter. “When you find someone you’re interested in then go for it. I wouldn’t say there isn’t a limit, I think some age differences are too big, but a freshmen and a senior doesn’t seem too bad.”

My brother is 22 years old and his boyfriend is 10 years older than him. They have been together for more than two years now. And while a year separates my brother and me, 14 years separate our boyfriends.

“I typically date individuals that are older than me because I feel like they are more responsible… I would date a senior,” said Chris Dial, a freshman from Armstrong Atlantic State University. “I like being able to have someone to depend on but not having to carry the weight of someone younger and less experienced than me. If they already knew what life they had ahead of them, maybe, but other than that no, I would not date a freshman.” 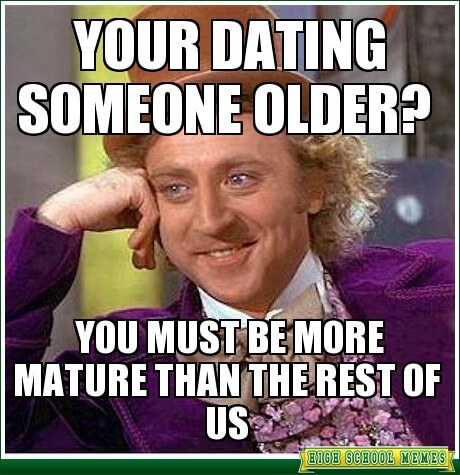 So apparently it isn’t just a matter of maturity, but timing. Upperclassmen, think about where you were as a freshman and how much your life changed throughout your college career. You and your freshmen squeeze are at different places in your lives. Freshmen, look back at high school. Did your life do a 180 over those four years? Wouldn’t it make sense for the same thing to happen again?

But that should not suggest incompatibility and shouldn’t raise enough red flags to trump your feelings for someone younger or older than you. Besides, where a person is academically doesn’t necessarily reflect where they are mentally.

“The guys that are out of high school aren’t mature enough for me. I tend to date older people in general,” said Savannah College of Art and Design junior, Katie Hatfield. “But if I knew them and they were mature enough, why not, you know? I grew up in a family with parents 10 years apart, so age doesn’t really matter to me. It is more the mindset of the other person.”

Freshman and seniors typically don’t meet anyway. You don’t have classes together, you move in different social circles. But if some freshman falls into your life and you want them to stay there, let them, and don’t discredit the person based on age. There are plenty of freshman fish in the sea, and out of all of them, there is bound to be one that sparks your interest and has some maturity to boot.

Previous Post:Spring Break: Reality vs. Fantasy
Next Post:The End of University Research as We Know It