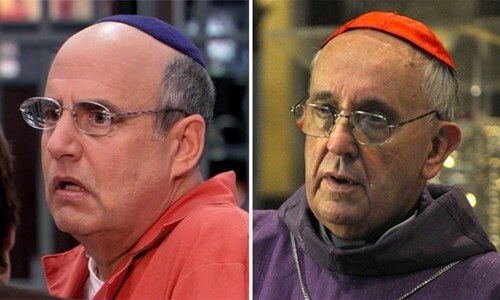 5 Things You Should Know About Pope Francis

He's been on the front pages of newspapers and on the covers of magazines. But while Jorge Bergoglio of Argentina may be old news by now, he still definitely stands out from his predecessors. The media has revealed that he’s a man of both simplicity and controversy, and people seem to either love him, hate him or just think it's really strange how much he looks like George Bluth. Makes you wonder—what’s the deal with Pope Francis?

The reason why his name isn’t followed by a numeral (like Benedict XVI or John XXIII) is because he’s the first to take the name Francis. He chose the name in honor of Francis of Assisi, known to be a lover of nature and caregiver of the poor. Francis of Assisi abandoned the wealth of his family to bond with the sick and the poor. CNN Vatican expert John Allen described the name selection as “precedent shattering.”

2. He’s been breaking traditions since day one.

In addition to the fact that he is the first Jesuit Pope and the first non-European pope in the modern era, Pope Francis broke traditions the moment he stepped out onto the balcony to reveal himself as the new pope before 150,000 people. Instead of praying for the crowd first, he asked them to pray for him. He also refused to step on a platform to elevate himself above the cardinals.

Although a conservative in some matters, the pope is considered liberal in many senses. During Holy Thursday, Pope Francis washed and kissed the feet of two young women at a juvenile detention center, sparking debate among conservatives as no pope has ever washed the feet of a woman before. He spoke out against priests who refuse to baptize children of single mothers. Even early on in his papacy, we see that Pope Francis is not afraid to stand up for what he believes in.

Pope Francis is handed the legacy of sexual abuse, corruption and infighting. According to The BBC reports, Pope Francis told his staff to take "decisive action" when it comes to matters of clerical sexual abuse of minors. However, The advocacy group Survivors Network of those Abused by Priests dismissed Pope Francis' statement saying that actions speak louder that words.

Although he is a popular pope, his past is surrounded by controversy. First of all, his career as priest coincided with a murderous military dictatorship (1976-83) and the church was criticized harshly for not doing enough to stand up against the dictatorship. In addition to that his opposition to gay marriage, gay adoption and contraception resulted in clashes with the Cristina Kirchner, the president of Argentina.

He uses public transportation, thanks the help, cooks his own food and refuses to live in an archbishop’s palace. One thing is undeniable— the new pope is a humble man.

Photos from cheezburger.com and cagle.com

Previous Post:Pre-Schooler vs. Scholar: Were Those Really the ‘Good Old Days’?
Next Post:Coachella 2013 Music Preview: Did YOU Get a Ticket?