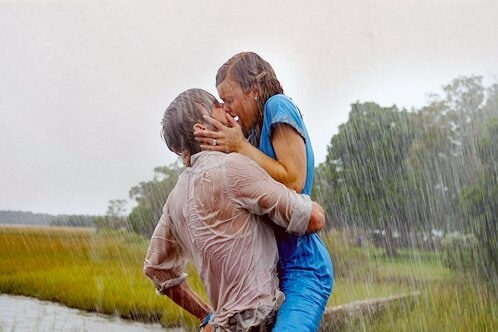 5 Lies Hollywood Told Us About Love

Relationships are hard enough between two people, but mix in some outside influences and the combination could be deadly. I’d like to think seeing an occasional rom-com is harmless, but it’s safe to say that Hollywood is to blame for many of our unfulfilled romantic expectations, and here’s why:

1.) Chase scenes are too much work.

First of all, it’s the 21st century folks.  If you’re going to receive a last minute theatrical confession, it’s probably going to come through in a text.  Besides, security in airports is way too strict nowadays for all of that last minute ditch, Gate F22, “Don’t fly to China because I just realized I love you” nonsense.  Besides, who isn’t going to be upset about that $500 nonrefundable plane ticket?

2.) Getting rained on is usually not fun… and almost never romantic.

Remember that scene in The Notebook when Noah and Allie, freshly reunited after many years, are in the canoe and they passionately kiss when it starts to pour the rain? Well, that’s really nice, but I think what we’re forgetting here is that Allie is rich and dainty, and if that moment had been real life, she’d be more worried about her hair and designer dress than kissing a common laborer.

Us normal people have to take our makeup off after a night at the bar or we wake up with eyes mascara’d shut. In movies, they wake up with sex hair more reminiscent of a fresh prom ‘do, macking on the other as if their breath doesn’t smell like complete butt.

4.) During that awkward “speak now or forever hold your peace” part of the wedding, everyone is afraid to move… much less speak up.

Though they probably should, wedding day epiphanies don’t play out often in real life.  Maybe the divorce rate wouldn’t be so high if we’d follow in the footsteps of those who ran at the altar for someone more suited. Sweet Home Alabama? Love and Basketball? Anyone?

Four words: A Walk to Remember.  Most of us don’t even finish our own bucket lists, much less help some girl we hardly know finish hers… and then marry her on her death bed. Smooth moves, Landon, but where are the real life versions of you? (Crickets.) …yeah.