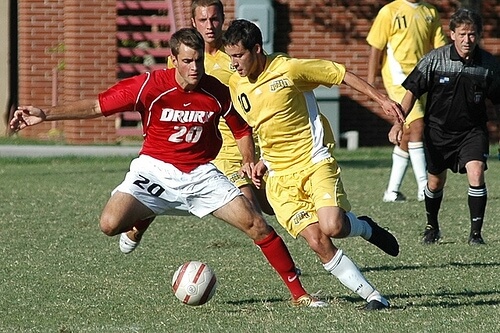 Here are four players ready to have breakout campaigns during this fall's college soccer season.

More of the Same

In 2010, Ryan Finley and Kyle Ciliento were some of the best players in college soccer and should continue their dominance in 2011.

Last season Ryan Finley scored 17 goals leading the nation by averaging .94 goals per game.  With 2.06 points per game, Finley finished second in that department behind now New York Red Bull Corey Hertzog (Penn State). After being suspended from his squad at Duke, Finley transferred to South Bend and should have a good shot at taking the number one spot this fall.

“I am really looking forward to playing here at Notre Dame,” Finley said. “Notre Dame is full of classy people and I am really excited to work with the team and the coaching staff.”  Last season the Fighting Irish’s top goal scorer Steven Perry scored 12 goals, while their next best scorer netted four goals.  Finley should be able to take over for Perry and be even more dynamic than last year.

Kyle Ciliento saw Finley’s 2.06 point per game average and raised him almost a whole point.  Ciliento tallied 3.00 points per game last season and has put up absurd numbers in his first two years at Grand Canyon.  The junior forward has knocked home 50 goals in his college career so far, putting him just five goals short of the Grand Canyon career record. Ciliento is a two-time First Team All-American and is poised to become Grand Canyon’s all-time career scorer and then some.

Will Walsh and Javier Mena are ready to become top players in college soccer.

Expectations were already pushed on Will Walsh freshman year when he was included on College Soccer News’ “100 freshmen to keep an eye on” list.  This season there should be even higher hopes he will be a stand out because of his stellar play in goal last fall.

After Notre Dame’s number one keeper Philip Tuttle suffered a knee injury last summer, Walsh stepped into the starting role and played exceptionally well.  In seven games, he posted a 0.54 goals against average, 28 saves, and a .875 save percentage.  The as a junior he also recorded four shutouts including games against California and Michigan, both top-ten teams.  If the Irish had continued Walsh’s goals against and shutout percentages, they would have finished fourth in the nation in those categories.  Walsh, however, did not play the final 13 games of the fall, because of a season-ending injury and Tuttle’s return on September 29.

In his first year at Dickinson College, midfielder Javier Mena tied for the team high in goals with seven, including a team best three game-winning goals.   At the end of the season, Mena was named to the All-Mid-Atlantic Region Team.

“To have a Dickinson player in the all–region team is something to be proud of, because if it weren’t for the rest of the team I wouldn’t be there,” Mena said.

Mena was originally looked at by big-time Division I programs, but he ultimately decided to play in the Centennial Conference, one of the most competitive conferences in Division III soccer.  The Salvadorian midfielder should continue his success in his sophomore season and play a pivotal role on the team.  “This season I will try to improve my soccer to help the team reach the goals we have set,” Mena said.